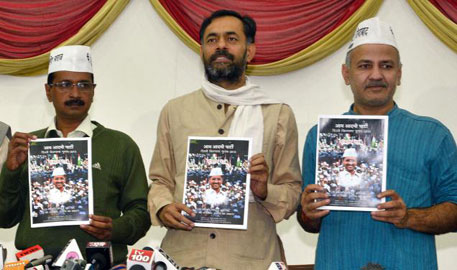 The Aam Admi Party (AAP) has pledged to fight against the three Cs—corruption, communalism and crony capitalism—in its manifesto released on Thursday. The party says it will do so by devolving powers to the common man. The manifesto also promises universal healthcare and education. Most of its promises are new and some are repeat of what it promised the people of Delhi during the Assembly elections.

In its 28-page manifesto has been prepared after consultations with people from various states, academicians, activists and experts in the past one year. The manifesto discusses in detail returning political power to the common man by implementing “swaraj (self rule)” across the country.

Under it, every gram sabha (in case of rural areas) and mohalla sabha (in case of urban areas) would decide developmental work as per their needs and priorities. Swaraj would be achieved through empowering local communities to look into issues like rain water harvesting, particular roads, school repairs and opening of dispensary.

The manifesto claims to make judiciary accessible to common men by effecting implementation of gram nyayalaya (village court). A Gram Nayayalya Act of 2008 was passed in 2009 but not implemented.

The manifesto promises empowerment of gram sabha and all civic amenities to rural people which urban people enjoy and aspire to. The manifesto also promises to develop tier-II and tier-III cities in a way that they become engines of growth for rural economy.

The manifesto also talks of effective implementation of Forest Rights Act as well as Panchayat (Extension to Scheduled Areas) Act in tribal areas and devolution of power to gram sabha to empower tribal people.

The manifesto promises to implement recommendations of the M S Swaminathan committee report on agriculture, increase minimum support prices (MSP) as well as extend it to 25 more crops.  It also talks of accessibility to formal credit and insurance to small and tenant farmers to prevent farmers' suicide.

The manifesto talks about phased shift to renewable sources of energy. Unlike Congress's manifesto which talks about centralised solar and wind energy missions, AAP promises promotion of decentralized renewable energy solutions such solar power, biogas and water mills to reduce infrastructure and maintenance costs and local entrepreneurship. Renewable energy experts believe that decentralized renewable energy is the need of the hour as still more than a million households live in darkness after sunset. Neither the electricity grid reaches them nor do they have the money to invest in alternative sources of energy. Centralised schemes like Remote Village Electrification programme have failed miserably.

Promise of affordable health for all

For improving health services, AAP has included all the essential demands of civil society groups, though the party has not clarified what percentage of GDP it would allocate for public health.

The party has also assured universal healthcare, right to health and free medicines to all patients in its manifesto. The party also claims it will make private sector accountable by making it mandatory for hospitals to display a charter of patient’s right and also to display rates and charges of various services.

The manifesto seeks to empower local communities with rights over their natural resources. AAP appears to be the first party in India to promise a natural resources policy for the country. The manifesto has a separate section, titled 'Environment and Natural Resources Policy' in the chapter 'Economy and Ecology'.

AAP's policy on natural resources are based on principles that have already been upheld by the Supreme Court through various judgements, including the landmark 2G scam judgement in 2012. In the manifesto, the party draws from the recent scams that have taken place in the natural resource allocation in the country. “All the recent big scams—such as land, coal , gas  and even spectrum —are directly linked to natural resources allocation and point towards an unethical scramble for our shared wealth and deepening danger for our democracy,” the manifesto states. It accuses the political class for looting the natural resources of the country, while stressing on the rights of the local communities, environmental and social costs and inter-generational equity.

The manifesto makes the following provisions in its natural resources policy: