Aam Aadmi Party’s metamorphosis from a civil movement into political party is not a lone instance; such experiments started in rural India 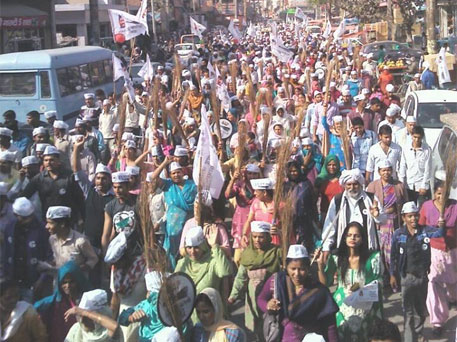 Symbolism is essential in politics. A year ago when the anti-corruption campaign led by Anna Hazare split up after one of the key leaders, Arvind Kejriwal, decided to join electoral politics, the world’s largest democracy faced a sea of questions. Since then, Kejriwal, and his new political party—Aam Admi Party (AAP)—made regular and symbolic public display of their might. Whether choosing Delhi as the first place to contest elections or getting the jhadu (broom) as the election symbol, AAP fast became an “aam” (common) symbol of public resentment against almost everything ailing us. The symbolism ends there. A serious contender in Delhi elections that made the historic change in the state's electoral landscape from a two-way straight contest to a triangular one, AAP is a real symbol of a civil society movement transforming into a successful political group. But AAP’s emergence raises another larger question: Is electoral politics the right choice for civil society?

There cannot be a definite yes or no to the group’s decision to contest politics after 15 months of high-pitched moral fight against the evils of electoral politics. The verdict for Delhi shows that people do support AAP. But it also gives one an opportunity to revisit the contentious issue of civil society groups or people’s movements joining party politics to push their agenda of change. Political parties have been challenging civil society members to join electoral politics to bring in changes the latter have been fighting for from outside the system.

Anna Hazare’s anti-corruption campaign had unexpected support. In the recent past, the country has not witnessed such an outrage against corruption. His movement had all the makings of a successful political movement, except one: Team Anna never projected itself as a political movement. So, the sudden decision to not only convert into a political movement but to take a giant leap to join party politics triggered a debate. The campaign is middle-class driven. And this class, by convenience, wants governance, not politics. In a democracy, this disjoint is unworkable.

India has had many people’s movements that proudly assumed political identity; in fact, most of them declared this upfront to gain more credibility. Team Anna’s decision may sound “historic” to many, particularly the contemporary generation belonging to the middle class, but India’s rural areas have had a long history of such experiments. Most of these experiments revolve around rights over local resources, and are rural by constituency. More importantly, these experiments never suffered from the disjoint between governance and politics. They demand political changes that ensure people’s rights over land, forest and water, among other things. They proactively facilitate electoral events like campaigning to push their agenda among politicians. Their electoral success is negligible but they still remain unified unlike the Team Anna campaign.

After much debate, the Mazdoor Kisan Shakti Sangathan (MKSS), a people’s movement working on Right To Information, work and ethical electoral process, fielded candidates for local bodies in Rajasthan. Already enjoying popular support, the candidates were successful. However, MKSS has not furthered its electoral base. But the decision to stick to local government is the lesson to be learnt. MKSS’ campaign for transparency in governance brought it closer to communities. At the local government level, issues bring more electoral mileage than party affiliation, and there is more direct interaction between candidates and voters. So, MKSS figured out the contour of its electoral foray well.

India’s largest association of people’s movements, the National Alliance of People’s Movements (NAPM), entered electoral politics in 2004 after rigorous internal debate. The alliance was set up in 1992 to offer solidarity to various communities fighting violation of their rights. NAPM terms itself a non-party political movement. In 2004, it created the People’s Political Front, a separate but related wing that can contest elections. By doing this, NAPM retained its non-party image. The Front promises an alternative to the Delhi-centric political parties, a promise the Team Anna had maintained. One of NAPM’s founders, the Samajwadi Jan Parishad, registered itself as a political party in 1995. It has been contesting elections since then; it puts up candidates for panchayat, assembly and parliamentary elections. Its argument for joining party politics is: over the years it mobilised communities on local issues, but these are appropriated by political parties during elections. Once the elections are over, the issues get a burial; demanding another round of mobilisation. The Jan Parishad did not perform well in assembly and parliamentary elections but has achieved some success in panchayat elections.

The above experiments show that people’s movements have been electorally successful at the local government-level. Many leaders from these parties point out that politicisation of people’s movements has not reached a level where they will impact assembly and parliamentary elections, but panchayats provide the best possible opportunity because they involve local issues and facilitate direct interaction between leaders and voters. But unlike their predecessors, AAP has appealed to the urban middle class. It has proved history wrong. That is a new turn in the civil society’s journey on electoral path.