Forest fires a recurring problem across the country 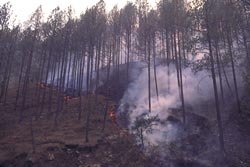 come the summer and reports of raging forest fires start trickling in from various parts of the country. This year has been no different. A series of blazes broke out in Karnataka, especially in the Muthodi reserved forest of Chikmagalur district and Nagarhole National Park in Kodagu (Coorg) district. Uttaranchal's Garhwal and Kumaon regions also witnessed major fires in March this year in reserved as well as other forest areas. So too did large tracts in Kerala.

"Fifty per cent of the country's forestland is threatened by fires. And it is noteworthy that there are no natural fires in India, except for a few places in Sikkim and Himachal Pradesh," points out Sudipto Chatterjee, coordinator of the World Wide Fund for Nature's forests and biodiversity conservation programme, Delhi chapter. According to Chatterjee, fires are ignited intentionally for various reasons such as increasing the undergrowth during monsoons for grazing, clearing out bush to facilitate collection of non-timber forest produce, or by communities practising slash and burn cultivation. At times, the causes can also be accidental as fires lit to burn crops in agricultural fields or during control burning by forest departments (fd) might fan out to a larger area.

In Karnataka, Nagarhole National Park has suffered the worst damage. It is estimated that about 9,000 hectares (ha) of forests have been affected in the region. fd staff shortage is said to have made matters worse. In Uttaranchal, about 425 ha have been gutted. "The damage has been more extensive in the Garhwal region," reveals Rekha Pai, deputy inspector general of forests, forest protection division, Union ministry of environment and forests (moef).

Such blazes cause financial losses to the tune of Rs 440 crore each year. At least 25 per cent of funds are set aside for fire control and management in the moef's Integrated Forest Protection Scheme, which has an outlay of Rs 100 crore for 2004-2005. "For a country like India, traditional methods of controlling forest fires and community involvement are more important than the use of modern techniques," believes Chatterjee.

With inputs from Neelam Singh