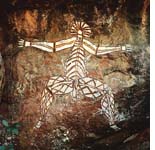 Barely a month goes by without a painting by an Australian aboriginal artist selling for a record price. But the beauty of those paintings that frequently grace Australia's art galleries and corporate board rooms mask the often complex stories they tell. The dots and lines that represent sand hills and water holes in the desert may also depict a massacre. That's true of the Cross Country Project as well. Curated by art historian Carly Davenport Acker, it involved some of Australia's most senior aboriginal artists travelling the length of the 1,600-km Canning Stock Route to help reinterpret history.

The route was cut 100 years ago to allow cattle barons move their stock from Kimberley in northwestern Australia to goldfields in Western Australia. While the cattle barons' march has attained iconic status in the European version of Australian history, the aboriginal side of the story has remained hidden.What is known, however, is that the creation of the route ended the traditional life of the western desert people forever.

"We discovered that it was the 100-year anniversary of the Canning Stock route," Davenport Acker said. "The white man history has been told and it's today in the book. But our history is not there properly. That's why one way to tell them, we've got to tell them through our paintings," said artist Clifford Brooks. Oral historian John Carty noted, "There was a lot of violence, a lot of rape and abuse of aboriginal people by the cattle barons."