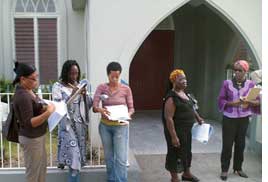 Parliamentarians in Jamaica, like in most places, are used to drama. But an enactment recently left many in tears. The Sistren Theatre Collective from Kingston staged a play, A Slice of Reality on the Ground, to make a strong case for the legalization of abortion, while Jamaica's parliament was deliberating a report of the Abortion Policy Review Advisory Group.

Lana Finikin, executive director of Sistren Theatre Collective, said the 10-minute play depicted real life situations in two communities in Kingston. "A Slice of Reality is about women who conceive after being raped and others who have been impregnated by the big men in society, who then refuse to accept paternity for their children," she said. The play was about the predicament of a woman with psychiatric problems who was sexually exploited by men.

Lisa Hannah, a member of the Abortion Policy Review Advisory Group, was visibly moved."I know a lady in my constituency who faced a similar predicament. She has eight children," Hanna told her colleagues.

Abortion in Jamaica is outlawed under the Offences Against the Persons Act, modelled along the lines of an English law dating back to 1861. It is life imprisonment for a woman who aborts her foetus and up to three years in jail for the doctor who helps her.