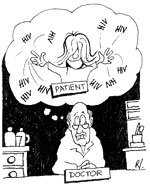 not everyone can afford the expensive multi-drug therapy for aids. But some of those who can afford it are not being given the treatment deliberately by doctors in the us. The reason is very simple: mistrust. Tyeisha Ross is a street smart 18-year-old girl who does not understand the responsibility expected of a person carrying the hiv virus. She sometimes misses doctor's appointments and fails to take medications.

Ross, through her Medicaid coverage, can afford the costly new drugs that might halt her progress towards aids, but her doctor will not prescribe them to her. She does not think that Ross can handle a complex drug taking regimen, where missing doses could have serious consequences, making her virus resistant to future treatment."I don't trust her ability to stick to a schedule," said Jeanne Carey, a physician at Beth Israel Medical Centre's hiv clinic in Manhattan.

In New York state, which has the most comprehensive drug assistance programme in the nation, everyone is covered for the new aids drugs. But still it is difficult for everyone to get them. As the demanding regimen for taking the new drugs taxes even the most stable patients, many doctors do not want to prescribe them to those with chaotic lives and a poor record of taking care of themselves. Doctors maintain that poor compliance with the drug-taking regimen could not only spell disaster for the patient, but also create a potential public health risk through the spread of a virus resistant to many drugs.

Thus as custodians of a life-prolonging drug therapy, the doctors who treat people with hiv are walking daily through a minefield of ethical, legal and public health concerns. And with the drugs theoretically available to all, aids experts see New York as a kind of laboratory for developing an ethical medical approach free of economic concerns.

"It's become a really loaded situation with profound implications, unlike anything I've ever seen in medicine," said Howard A Grossman, a Manhattan intern with a large aids practice. But Bruce D Agins, the state health department's chief aids doctor, said the state was "very concerned about people being denied access to the drugs in a wholesale way because they belong to a category of people, like junkies". Medical ethicists, who have been giving the new issue much thought, say that the morally defensible approach is to consider everyone a candidate for the drugs, be they illegal drug users, adolescents, homeless people, or psychiatric patients.

The scene is quite different in Carey's clinic, where she tracks the lives of 180 hiv-infected people. She effectively sits in judgement of them, deciding who gets access to the new drugs. The way she decided that Ross was not a good candidate for the treatment offers a glimpse into one doctor's thinking. Ross had dreams of big things in future: a fabulous house, a flush savings account and, chillingly for one surrounded by illness, a career as an undertaker. She said she contracted hiv through unprotected sex. Ross also had a troubled childhood. Since Ross started seeing Carey, she has missed six appointments and kept three. And she has become pregnant. And she concurred with her doctor's assessment of her as irresponsible.

Looking at the medical community's experience with tuberculosis, doctors and aids advocates have debated whether it would be feasible to start a programme in which pill taking would be observed at clinics. But the quantity of pills and the complexity of the routine would make it much more cumbersome than with tuberculosis. "We've actually thought of a kind of adult day care, where you can offer a whole plate of services while overseeing someone's drug regimen," said Jeanne Bergman, senior policy analyst for housing works, a service and advocacy group for people with hiv and aids.