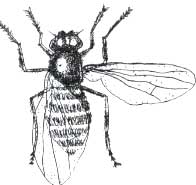 RECENT research on a genetic mutation in Drosophila melanogaster, commonly known as vinegar fly or fruit fly, has thrown new light on its effect on sexual orientation. This mutation, initially discovered more than 30 years ago, was found to convert normal heterosexual males into bisexuals. These males courted both males and females, seemingly with equal avidity. The mutant gene was designated fruity, or fru, a name that was subsequently changed to fruitless. (Variant forms of the fru gene that occur on the same chromosome, or its alleles, exhibit homosexual, fertile bisexual and sterile bisexual behaviour; for the moment, it shall be assumed that fertile bisexuals are being talked about.) Daisuke Yamamoto and her team at Mitsubishi Kasei Institute, Tokyo, have now identified the possible reason for this change in sexual orientation (Proceedings of the us National Academy of Sciences, Vol 93, 1996).

Yamamoto and her team started out by mutagenesing fly stocks by making use of a technique known as transposon insertion. In this method, a mutation is induced at random via the insertion of a transposable element or 'jumping gene' somewhere into the DNA of a host organism. If the mutation happens to be of the desired class - something that can be decided by examining the form or behaviour of the fly - it is an easy matter to pick out the region Of DNA into which the transposon has integrated; in other words, to pick out the gene that has been mutated.

The screenino procedure consisted of observing the behaviour of single male-female pairs of putative mutants when they were thrown together. Seven mutations were isolated. All were recessive: two copies of the mutated gene were essential for a defect to be seen. A single normal (wild-type) copy was suf- ficient to override the mutant effect. One of the mutants was named satori or sat, the Japanese word for nirvana. It was observed that mutant sat males did not show any interest in normal (wild- type) females. However, sat females are indistinguishable in their courtship behaviour from normal females. Therefore the normal sat gene in some manner mediates the courtship response of Drosophila males.

Unlike the fru mutant, mutant sat males were merely disinterested, not bisexual. So it seemed plausible that the two were different genes. But when the flies were cross-bred, in order to generate males that contained a' single copy each of the fru and sat mutations, it was found that they were bisexual ' Thefirulsat males mated with females and were fertile. It implied that the fru and sat were two Mutations of different sorts within the same gene. If they were entirely different genes, as was assumed earlier, the fru and sat mutations would have been compensated for by the corresponding wild-type genes. This hypothesis is supported by the observation that both frulfru and sadsat males lack a pair of sex-specific muscles in the abdomen. In short, sat and fru are alleles Of the same gene.

There are two possible explanations to the functioning of the normal fruitless gene (or satori, which is the same gene). One, the fruitless DNA sequence encodes a protein with characteristics that resemble those of other DNA-binding proteins that are known to be involved in the pathway of sexual determination in Drosophila.

Second, the fruitless gene was found to be transcribed in two regions of the brain: the mushroom body and the antermal lobe. The latter might be involved in neural processing of smells that are used in sexual recognition. The developmental failure ofthe sex-specific muscle can be explained as being caused by a defect in the nerves that enervate the muscle. The hypothesis is that a failureto perceive odour cues, or an incorrect interpretation of odour cues, might affect the courtship behaviour displayed by fruitless males. Mutations in a single sex-determination gene could lead to a change in some brain cells and alter sexual orientation in the male.