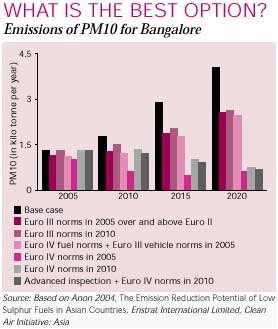 concerned at the urban air quality due to emissions from diesel vehicles, the Clean Air Initiative for Asia (cai Asia) sponsored a study in three typical Asian cities--Bangalore (India), Bangkok (Thailand) and Manila (The Philippines). Its verdict: for optimal emission reductions, advanced fuels and vehicle technologies be adopted immediately and adequate vehicle maintenance encouraged among the owners.

Based in Manila, cai Asia is a coalition of regulators, research institutions and non-governmental organisations, supported by the World Bank, the Asian Development Bank and the Japan Petroleum Energy Centre. The study--The Emission Reduction Potential of Low Sulphur Diesel Fuels in Asian Countries-- assessed the impact of low and ultra-low sulphur diesel fuel on emissions of key pollutants: oxides of nitrogen (nox), particulate matter smaller than 10 micrometre (pm10), and oxides of sulphur ( sox). Diesel vehicles were found adding up to 85 per cent of nox and pm 10 to the total emissions from all vehicles. Their contribution to sox is quite small: for instance, in Bangalore it is below one per cent. In case of other pollutants, such as carbon monoxide and hydrocarbons, diesel vehicles contribute just 5-10 per cent to the total emissions, says the report.

The emissions were computed and projected till 2020 under different scenarios. Data on fuel quality and emission norms followed for the 1990-2003 period constituted the base case emissions. Other alternative scenarios considered were with better vehicle technologies, better fuels or both.

In all the cities, leapfrogging emission and fuel norms from Euro ii to Euro iv could significantly reduce total emissions by 2020, says the study. For instance, in Bangalore, immediate introduction of Euro iv can reduce nox emissions by 50 per cent and pm 10 emissions by 85 per cent by 2020 (see graph: What is the best option? ). Conducted by Enstrat International Limited, the study noted increasing number of diesel passenger cars can be a serious concern.

While projecting the pollution levels in these cities, the study mentions that the nox and pm 10 emissions reduce as more vehicles with new less polluting technology vehicles are used. However, this benefit can be nullified with a higher growth of vehicles that can offset the benefits of new technology.

The findings were presented at a conference in Agra, December 6-8, 2004.