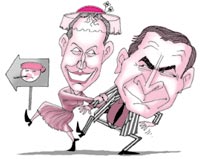 The Prime Minister of uk, Tony Blair, has made a New Year resolution: to put pressure on us President George W Bush to tackle climate change. The intention is to challenge the us administration more forcefully than before on the need for an international effort to fight global warming. It is also being hoped that this would help Blair in getting rid of the image of being too soft on Washington.

The British government wants to make revival of the global endeavour to deal with climate change a major theme of the g-8 summit to be held in the uk in 2005. Blair is also said to be persuading Bush to put the issue high on the agenda for this year's meeting in June, which will be hosted by the us. The us President's interest, however, lies in garnering support for his plan to develop new technologies that will either help in reducing emissions or sequestering them.

Earlier in January, the uk government's chief scientific advisor, David King, labelled climate change as a bigger threat to the world than international terrorism. Goading the us to do more to cut greenhouse gas (ghg) emissions, he said: "...At present the us government is failing to take up the challenge of global warming. If we do not begin now, more substantial, more disruptive, and more expensive change will be needed later on."

However, if Blair wants to avoid being called pro-us, he will have to go beyond mere rhetorical exhortations that urge the us to play a key role in the climate change debate and cooperation in science and technology. Nothing less than mandatory cuts in ghg emissions and immediate action to implement them by the us will suffice.