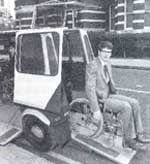 RECENTLY, a woman in France was convicted to 10 years in prison for letting her quadriplegic husband rot to death. What would that man have given to be able to use his hands can well be imagined.

But awaiting the us Food and Drug Administration's approval is a medical device which would enable paralysed people to make use of their hands for grasping objects. The Neuroprosthetic Hand Grasp System (NHGS) is the device used for the 1st time, to restore functional movements in the hands and fingers of quadriplegics by implanting a muscle stimulator into the patient's chest.

Developed at the Veteran Administration Hospital, Baltimore, the device is not suitable for all paralytics. Those who can move their shoulders and bend their elbows, but not make full use of their hands are eligible for implants. Also, the patient himself should be highly motivated to try out this technology.

In paralysis, caused by spinal cord injuries, the brain is unable to send messages to the nerves in the arm. The NHGS sends signals to muscles directly, thus bypassing the patient's damaged nervous system. A small electric stimulator implanted into the upper chest is connected to a series of wires embedded in the arm -- from the shoulder to the wrist. These wires are in turn attached to 7 electrodes sewn into the forearm muscles, which control the hand movement.

The implant surgery requires 3-4 weeks of hospitalisation, followed by months of therapy. The costs are about US $35,000. The therapy, now being conducted on an experimental basis on 3 Baltimore patients, will take at least another 5 years before it can be introduced into the market.