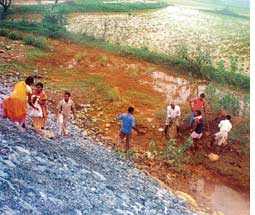 Radioactive waste spills over into fields in Jharkhand

about 4 hectares of agricultural land in Talsa village near Jamshedpur looks jaundiced. The soil has turned light yellow and villagers fear it might have gone barren. On June 17, radioactive waste from a pond of the Uranium Corporation of India Limited (ucil) spilled over and deluged the village pond and well.

Fearing radioactive contamination, villagers stopped using the pond and well water. ucil claimed that the spillover was due to incessant rains causing floods. Rainfall this year was 390 mm, the highest in the area in 50 years. "There was no way to control the spillover. And there was no need to control it because radioactive content in the pond was extremely low and it was further diluted by the water," said P B Dubey, ucil spokesperson.

While the uranium mining major found it tough to control the spillover, villagers braved the rains to raise embankment around the fields to stop the spillover. Initially, they trusted ucil that the spillover of radioactive waste is harmless. Reality soon started showing its colour. "Our entire field turned yellow. Fish and frogs in the pond died. ucil is not ready to tell us the truth," said Daroga Hembrom and Kanhu Ram Murmu of Talsa. Villagers are knocking the doors of social organizations and people who can get the soil tested from a good laboratory. They do not trust ucil. "They always manipulate findings," said Jiten Hembrom, another villager.

Not a single social organization has come forward to support the villagers. Arjun Samad is the lone activist fighting for them. "ucil has got a team of Bhabha Atomic Research Centre (barc) to get the water tested. The report claims that everything is fine. But there is severe itching when one enters the fields," Samad, who was arrested for opposing ucil mining a few years ago, said.

Fear among the villagers is palpable. "After our protest ucil has agreed to give us a compensation of Rs 14,000 per acre (0.4 hectare). If our fields are not contaminated then why are they giving us the compensation? There is something gravely wrong," said a villager.

ucil maintains that in Turamdih Tailing dam catchment area, there was large accumulation of water which overflowed into downstream area flooding the monitoring pond. The site was inspected by senior officials of ucil and water sample was collected by barc.