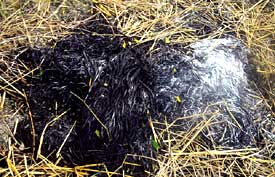 ON the surface, it was a typical fortnight in India's debate on genetically modified (gm) crops. Right after the International Rice Congress in Delhi promoted the benefits of transgenic rice, a plot of Bt rice was burnt in Haryana amid biosafety fears, and a complaint was registered in eastern Uttar Pradesh (see box Nailing GM). Burning of trial gm crops is not new in India, be it activists burning 'legal' Bt cotton trial plots in Karnataka in 1998 or regulatory authorities ordering the burning of fields growing 'illegal' Bt cotton crop in Gujarat in 2001.

But recent events point to three major differences in India's gm debate. One, the crop involved is rice, a staple food; international agribusinesses haven't been as successful in pushing through gm food crops as they have in pushing cash crops such as cotton and soyabean.Two, it isn't just anti-gm activists at the centre of the opposition to gm crops. India's rice exporters, who are a powerful lobby, have come out against gm rice. They fear losing the lucrative European market, where consumer movements are part of the anti-gm struggle. Three, the anti-gm activists are using the Right to Information Act to get government records that were beyond reach (see box In public domain; and map Location disclosed). 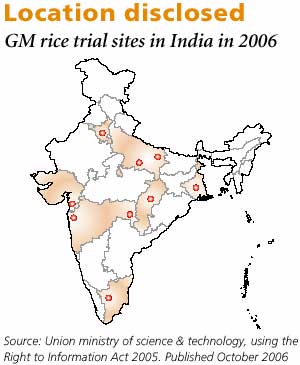 Bt rice has a built-in resistance to the leaf folder and stem borer, two of the most serious pests of the rice crop. But it has not been approved for cultivation anywhere in the world. In India, the crop is at an advanced stage of trials at the behest of the Indian Agricultural Research Institute and Mahyco, India's largest seed company. "There is neither environmental assessment, nor human food safety assessment available for Bt rice. Proper precautions must be taken," says Robert Zeigler, director-general of the Manila-based International Rice Research Institute. Bt rice is much more important than Bt cotton, the only gm crop released for commercial cultivation in India, because rice is a food crop.

On October 28, activists of the Bharat Kisan Union (bku) stormed a gm rice plot in Rampura village of Karnal district's Indri block in Haryana. They were led by Rakesh Tikait, son of Mahendra Tikait, a leading farmer leader from Uttar Pradesh. "The way gm trials are done in the country plays with the ignorance of the farmers, as this case shows. Given the unreliable track record of the company and regulators in preventing contamination from the trial plots into the supply chain, we are here to ensure that such a thing doesn't happen," he says. "This drastic step was taken to prevent contamination from the rice plot; it was also intended to contain the breach of department of biotechnology's biosafety guidelines for gm crops," added Gurnam Singh, bku's Haryana chief. Rajesh Krishnan, head of Greenpeace's anti- gm campaign in India, expressed fears of environmental impacts of such trials, when it is known that regulations are not followed.

Paramjit Singh, the rich farmer who had leased out his land to Mahyco for trials of gm rice, is bewildered. "I don't understand the difference between gm and non-gm; or what this contamination entails," he said. Mahyco maintained an official silence. But a senior company official confirmed to Down To Earth (DTE) that the burnt crop was indeed gm rice.He insisted that all regulations had been followed. This, it turns out, is a matter of interpretation.

The gm rice was sown in the field on July 1, Paramjit Singh told dte , after Mahyco had leased his land for Rs 15,000 per acre (Rs 37,500 per hectare, ha) from June 30 to November 30. "I was happy with the money and rarely bothered about what they are growing. I thought it was hybrid rice, which is very high yielding," said the farmer, who owns 22 ha (55 acres) of land.

bku and Greenpeace activists say the permission letter for cultivation of gm rice from the Genetic Engineering Approval Committee (geac), India's regulator for gm field trials and commercial release of crops, was issued on July 11, 10 days after the sowing. There is another accusation that Mahyco didn't inform the state and district agricultural authorities, or the gram panchayat, about the trials, as required under the rules. State agriculture officials did not respond to repeated queries from DTE.

The sarpanch of Rampura panchayat pleaded ignorance, as did the villagers. They said bku activists came on October 28 with video cameras, and started capturing footage of the field before the villagers realised what was going on. Mahyco's field manager asked them to get permission from authorities. This is when the activists burnt the field. Thereafter, Paramjit Singh and the villagers were informed that this was gm rice, and it could contaminate their non-gm rice. They were also told that this could affect the prices, and they might not be able to sell their produce.

Paramjit Singh was happy with the bumper crop he had got. He said he sold it at a nearby mandi in Ladwa, where he also runs a shop. Domestic buyers and sellers don't have a stance on gm rice.


India's rice exports are worth Rs 7,000 crore a year. "Any contamination from gm rice will sound the death knell for millions of farmers and exporters in India," says Anil Adlakha, executive director of the All India Rice Exporters Association, Delhi. "This is a caveat; we would like the centre to draw lessons from the plight of the us rice industry, which lost its export market in the eu and Japan in the wake of suspected gm rice contamination," says R S Seshadri, director of Tilda Riceland Pvt Ltd. 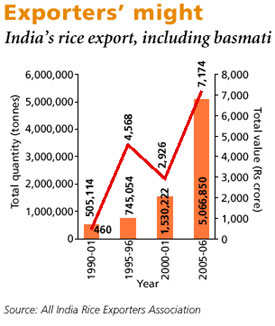 Since August 2006, the eu and Japan virtually banned rice imports from the us after shipments of the Arkansas-based Riceland Foods Inc were officially confirmed to have contained traces of an unauthorised gm strain called Liberty Link-601. India benefited from this ban as its exporters got a bigger share of the market. Exporters fear a similar reaction in Europe to Indian exports if they detect any contamination. The fear is especially acute with regard to contamination in basmati rice, a marquee export item from India that is growing at an exponential rate (see graph Exporters' might). If gm contamination is detected in India's rice, exporters are bound to suffer, whether farmers and consumers are affected or not.

This has brought India's gm debate to a head, with one industry pitted against another. The gm seed industry is much weaker than the rice exporters. Rice mills and exporters represent a sector worth Rs 7,174 crore a year; if domestic sales are included, this exceeds Rs 40,000 crore. India's seed industry's revenues are estimated at Rs 4,500 crore.

A farmer in Rampura village said the field was burnt to protect the interest of the exporters. But the anti-gm campaigners are not complaining. They have managed to get a business interest to align with their ideological position. What gm seed companies are now faced with is not just the pluck of the campaigners but also the interests of the rice exporters. Whoever it was among the anti-gm activists that forged the alliance with the rice exporters has hit pay dirt.