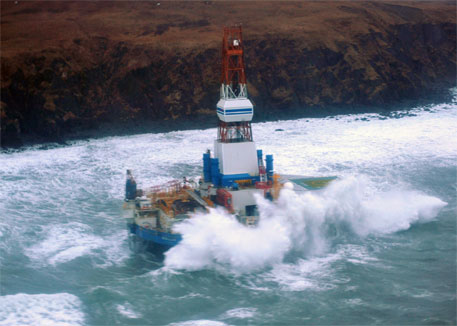 Global energy giant Royal Dutch Shell is inching closer to Arctic, one of the richest fossil basins on the planet. This, in turn, is expected to pave way for other countries’ exploration plans in the region. Meanwhile, a group of environmentalists are protesting the multinational’s oil and gas exploration bid. According to CTV News, Calvin Craigan, chief of local group Sechelt First Nation said that increased tanker traffic in the region could be disastrous and that Shell should be banned from the area.

“The US government’s own analysis estimates that there’s a 75 per cent chance of a large oil spill if Shell is able to successfully extract oil from the Arctic. And industry experts say this would be virtually impossible to clean up,” says a report on the website of Greenpeace.

Guardian has reported that environmentalists are miffed and baffled over US President Barack Obama’s “misleading” tweets justifying US’ decision to allow Shell exploration.

@POTUS Why are you allowing oil drilling in the arctic if you are concerned about climate change? #AskPOTUS

Earlier this month, US’ Bureau of Ocean Energy Management (BOEM) had approved Shell Gulf of Mexico, Inc.’s oil exploration project in the Chukchi Sea, a minor sea in the Arctic Ocean, off the coast of Alaska. According to USA Today, Shell was in the Chukchi and Beaufort Seas for much of 2012—a stint that ended with more headaches than drilling. It had put the operations on pause in early 2013 following some failures and economic crisis.