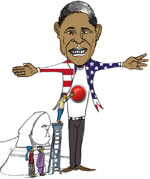 The US government is spending millions of dollars developing technology to help prodemocracy activists in West Asia, Africa and China.

Washington has begun to open up about the projects, which include a “panic button” that lets protesters wipe their mobile phones if they are arrested. State department official Michael Posner told BBC that the US was investing money “like venture capitalists”.

The US has budgeted $50 million since 2008 for its activist projects, which include developing systems to circumvent internetblocking firewalls. “We are working with a group of technology providers, giving small grants,” said Posner.

He described the challenge of keeping ahead of government controls in certain countries as “a sort of cat and mouse game”. Around 5,000 activists have received training, funded by the US government, he said.

Authorities in Egypt, Libya, Yemen and Bahrain have responded to dissident activities by restricting Net access and in some cases, temporarily shutting it off. In some cases, US-made technology has been used to impose those restrictions.