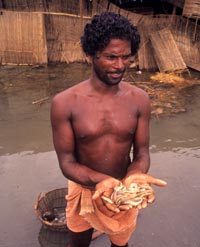 the Orissa government has decided to promote prawn culture in seven coastal districts of the state. This move has the potential for inducing a bitter clash between big farmers and traditional fisherfolk, if undertaken without a foolproof blueprint.

Under the proposed expansion, the government aims to generate Rs 2,000 crore annual revenue from nearly 40,000 hectares (ha) of government land. Currently, this sector contributes Rs 400 crore annually to the state exchequer. It is, however, feared that big players of the sector would hog all the benefits of the expansion in the absence of safeguards. "It is evident from the Chilika experience that some mercurial decisions by the state government in the past saw big farmers encroaching on the fishing sources of traditional fisherfolk. Now a decade has passed but there has been no let up in the bloody clashes," points out activist Biswapriya Kanungo.

Unlike Andhra Pradesh, 75 per cent coastland in Orissa is government-owned and fisherfolk and small farmers use it as a common property resource. If this land is used in prawn culture, many small and marginal farmers would lose their livelihood. According to estimates of the Aquaculture Authority of India (aai), intensive prawn culture is carried out in 6,079.37 ha of land in the state. Unofficial estimates say the aai figures show only 30 per cent of Orissa's illegal prawn culture industry.

Retired joint director of state fishery department, Surya Kumar Mohanty, suggests that small farmers, who should be the primary beneficiaries of the plan, should be involved in it from the planning to the implementation stage, so that they don't feel cheated. He proposes that clashes could also be minimised if 40 per cent of the total land mass is reserved for big farmers. At present, small farmers legally have 75 per cent share of the land under intensive prawn culture. But in reality, big farmers bribe them to get permits to operate on their land and kick them out completely after some years. A proper mechanism needs to be evolved so that the land reserved for small farmers is not transferred to the big players of the industry.