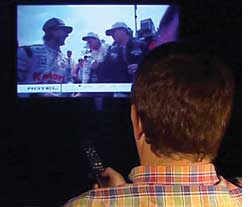 People in France might soon get to watch television without being bothered by pesky ads. The French Parliament has passed a law to impose new taxes on telecommunication companies and private broadcasters to finance an advertising ban on prime time television. It has also increased the television licence fee.

On February 4, senators in the National Assembly voted 177 to 159 in favour of legislation to ban advertising on prime time television. Those opposed to the bill threatened to take their case to the Constitutional Council, the highest legislative court in France, potentially delaying its enactment by several weeks.

To make up for 450 million, or US $582 million, in lost revenue at the public broadcaster, the bill enjoins a 0.9 percent tax on the sales of telecommunications companies. It also proposed a 0.3 per cent tax on ad revenue of private broadcasters. The licence fee paid by TV owners has been raised to 118 euros (US $160) from 116 (US $155) last year.