Adanis may have to leave Tadoba 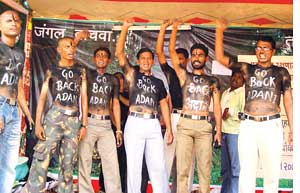 politicians cutting across party lines have opposed coal mining near the Tadoba Andhari Tiger Reserve in Maharashtra. Till recently they were pushing for fast-tracking clearance to the mining project proposed by the Adani Enterprises.

In a letter to Prime Minister Manmohan Singh, members of the Parliament (MPs) from Vidarbha said the proposed Lohara coal mining project in Chandrapur district will devastate the tiger reserve and requested the Central government to give it a second thought.

Political support to the project waned in July in the face of fierce public protests. Environmental activist Bandu Dhotre started a fast-unto-death on July 20. Dhotre's hunger strike gathered support from about 100 environmental organizations that staged protests, including mass head tonsuring and writing letters to the President of India in blood. On July 28, eight MPs from Vidarbha, including the Chandrapur MP Hansraj Ahir earlier supported Lohara mine, wrote to the prime minister demanding that the project be cancelled. Dhotre called off his strike on August 2 after Union environment minister Jairam Ramesh assured no project would be cleared without considering its effect on wildlife and environment.

Dhotre said he will continue his fight. "If the government clears the project, it will face stiff public opposition," he said (see 'Clearing forests for coal', Down To Earth, December 1-15, 2009).

Sudhir Mungantiwar, legislative assembly member from Chandrapur city, said political opposition to the project grew after two facts were revealed: One, a similar coal mining project was turned down in 1997 because underground mining (to minimise damage to the environment) is not possible in Lohara. Two, Adani is the biggest coal importer in India; it supplies coal to the Maharashtra government at an exorbitant rate. "Why can't it use the imported coal for its own power plant instead of mining for it?" he asked.