Add zip to your wound

Today, sutures and staples are outdated methods to seal an incision 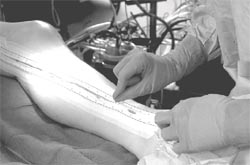 there are over four million surgical procedures performed worldwide annually. When traditional sutures and staples are used to seal a wound, postoperative complications resulting from air and fluid leaks are not uncommon. Such air and fluid leaks can delay recovery, lead to higher levels of postoperative pain and infection and precipitate other serious or life-threatening complications. Even when surgeons use sutures and staples that can be absorbed naturally by the body, leaking at the wound site can occur because, regardless of their composition, sutures and staples do not have inherent sealing capabilities. As there is no standard treatment for these leaks, surgeons have long considered them to be an unavoidable consequence and have developed ways to manage them.

Today, Whitcomb L Judson, who invented the zipper back in 1893, would doubtless be pleased as punch, had he been alive, to see that the zipper has made its way into the operating theatre - a giant leap from the outside of our bodies to the inside. Looking like an oversize white gauze bandage, the surgical zipper is a polyester patch with a polyethylene zipper running lengthwise down the middle. The underside is coated with a non-toxic adhesive like band aid. When closing the incision, the surgeon peels off the paper strip exposing the adhesive and places one edge on each side of the wound. Then by gently pulling up the tab, the surgeon pulls the zipper shut. As the zipper comes together so do the edges of the skin. The process takes less than a couple of minutes.

Like a recent case where a patient from New York saw a six-inch incision heal quite well. But when he had undergone chest surgery a few years ago which was closed with staples, he recalled the experience as extremely painful. "With the zipper, I had no pain at all," he says. At least three hospitals in the United States are using the zipper and more are following suit. The only manufacturer thus far - Atrax Medical Group Ltd., based in Bermuda, which sells it under the brand name Medizip - is planning wider distribution this year.

"The real benefit of these types of products is their intellectual appeal to the patient," Roslin said. "The patients really, really love it. Instead of complaining that they are nauseous or can't eat, they are showing people their zipper incision. Patients also spend a lot less time agonising over the thought of having sutures or staples removed." Surgeons, who have used the zipper, say that it is generally quicker to apply than sutures or staples, and what is more, it leaves less disfiguring scars and can simply be peeled off in the shower after 10 days or so.

There is one possible drawback with this method, admit surgeons who have mastered this method. The zipper takes a little more practice. One such Lawrence Altmann says :"You might get a surgeon who uses the zipper and doesn't get it quite right on the first try and incorrectly assumes that it doesn't work."

But the biggest innovation in wound closing came last year with the introduction of a tissue adhesive, Dermabond. This gluing method is "revolutionary in managing wounds," Dillard said. The tissue adhesive, 2-octyl cyanoacrylate, is used to repair low-tension cuts and to close surgical incisions. It reacts with moisture on the skin surface to form a strong flexible bond. This method, which is gaining popularity in emergency rooms and plastic surgery offices, is considered ideal for facial wounds. Children who typically do not sit well for traditional methods seem to fare well with gluing, say paediatricians.