A new computer software that converts a two-dimensional image into a three-dimensional one is expected to radically transform medical science. 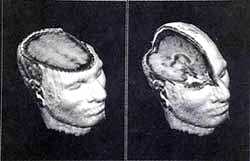 ANAMICA, a computer software developed by scientists at the Advanced Numerical Research and Analysis Group (ANURAG) in Hyderabad, is poised to revolutionise medical diagnosis and surgery by producing three-dimensional images of the insides of organs such as the brain, heart and even bones.

What ANAMICA -- ANURAG's Medical Imaging and Characterisation Aid -- does is to convert the two-dimensional images obtained from X-rays, computerised tomography (CT) scans and magnetic resonance imaging (MRI) into three-dimensional pictures. The image can be viewed from different angles, making minute analysis possible and enabling radiologists and surgeons to pinpoint tumour locations or problem spots in internal organs and decide on the safest surgical procedure.

The first version of the software will soon be ready, say ANURAG scientists. The project, started in 1992, drew extensive data from the Institute of Nuclear Medicine and Allied Sciences in New Delhi.

The three-dimensional imaging in ANAMICA goes through three stages. First, the image of the selected organ is divided into sections and then data is acquired for a large number of adjacent sections. Finally, the data is assembled on a three-dimensional grid and processed with the help of a fast computer-based graphic workstation, or a parallel processor. Once the data has been generated, the user can use the ray tracing technique, which mimics the way the human eye sees an object. This technique is especially useful in the reconstruction of data pertaining to soft tissues like that of the heart and the brain.

ANAMICA also offers a choice of operations such as zooming in onto selected regions, filtering, converting data into mathematical surfaces, tissue characterisation and image enhancement. The visual data is expected to help surgeons to plan and even rehearse surgery.

Scientists at ANURAG are trying to polish the package further by creating better images and faster analysis capability to ensure quicker decisions while diagnosing or during an operation. It is also expected that with slight modifications, ANAMICA could be used in various fields such as remote sensing, oceanography, seismology, and astronomy.