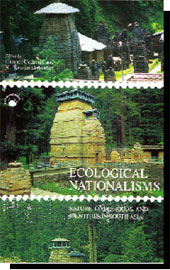 India's tryst with nation building has been -- and continues to be -- contested. Politically turbulent Jammu and Kashmir and a socially volatile Northeast are often cited as cases in point. But India's cultural frontiers are no less significant when it comes to analysing competing nationalisms. That, in fact, would hold true for all of South Asia. The story becomes more intriguing when ecological concerns get intertwined with those pertaining to national and cultural aspirations. So this compilation of 11 essays has all the elements of a pot-boiler.

The editors, Gunnel Cederlf -- associate professor of history, Uppsala University, Sweden, and K Sivaramakrishnan -- professor of anthropology and international studies and director of the South Asia Center, Jackson School of International Studies at the University of Washington --have done a wonderful job in bringing together studies that analyse a variety of regions, and authors who deploy a variety of techniques. Each paper in the volume not only addresses issues pertaining to cultural nationalism and identity politics but also offers novelty in method and approach.

For example. there's one paper from Nepal which talks of people's perception of nature conservation authorities, whom the king has legitimised. The piece is an assemblage of perceptions gleaned from interviews, on record and off it. There is another article from Meghalaya on how Khasi nationalism feeds into the debate on the Supreme Court restrictions on tree felling in Meghalaya. Another paper focuses on the discontent in Pushtoon forests in Pakistan as metropolitan control vies with indigenous versions of rights.

Environmental history has been built by a combination of field research and archival digging. Many environmental historians have demonstrated remarkable felicity in using oral histories, ethnographic data and folklore. This collection enriches the tradition.
The book is divided into three broad sections regional identity formation, competing nationalities and commodification. For a reader educated in the ways of historical scholarship, this delineation might be easy to follow. But a 'general reader' would find it difficult to make sense of such boundaries. Also, as political scientists note, the point at which regional history shifts into the domain of 'nation making' remains fuzzy.

It is here that this compilation runs a bit short. The editors seem to be chary of including more violent expressions of identities and national aspirations--perhaps not for lack of desire but because of the inability to easily access such material in English.

This collection could have greatly benefited from incorporating works that imbue greater complexity to nation-building projects of different communities. From India, two such cases stand out the struggle of the Mizo peoples and that of the Bodo peoples in Assam. In both these cases the different political systems have 'resolved' the conflict between indigenous version versus the metropolitan understanding of nature and rights through a constitutional solution. Consequently, the different sides in the debate have moderated their arguments and the debates take place in a hushed manner. Similar analyses would have enriched a lot of the essays in this volume. For example, one wishes that Vinita Damodaran's essay on the discourse on indigenous identity in Jharkhand had not ended at 2002 one wishes that it accounted for developments after the creation of Jharkhand state. The political trajectories in the forests of Jharkhand after the area became a separate state and their relationship with cultural identity awaits exploration

Another study that teases but disappoints is Antje Linkenbach's work on Uttarakhand and Chipko. It hints at the various interpretations of Chipko, alludes to the role of the opposing ideological forces like the Communist Party of India (Marxist) and Gandhians in the hills but leaves the historical archive unopened. Perhaps, we will find more answers in the author's forthcoming book on the issue. But as Dhan Singh Rana, a Bhutiya panchayat leader in Chamoli, Uttaranchal, who participated in Chipko as a teenager, says, "No one ever hugged a tree, but there were several Chipko Andolans in Uttarakhand. Everyone now recognises that. The country should now find out who mentally and financially funds these versions of such so-called struggles." He says this even as he re-interprets Chipko in his slogans for local elections in his constituency.

If Dhan Singh was to read this collection of essays, he would find answers to a lot of his queries. It's to the editors' and authors' credit that it would also make Dhan Singh and others more distant from the field ask far more complex questions.