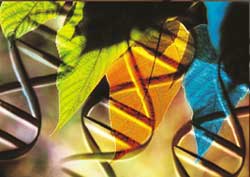 human genes associated with metabolism, skin pigmentation, brain function and reproduction have evolved in response to recent environmental changes, according to a study by scientists at the University of Chicago, usa.

Led by Jonathan Pritchard, the researchers scanned the entire human genome. They found more than 700 genetic variants that may be targets of natural 'positive' selection of favourable characters -- during the last 10,000-12,000 years. Over this period, humans have dealt with the advent of agriculture, shifts in diet, new habitats and changing climatic conditions. "This approach allows us to take a broad prospective to see what kinds of biological systems are undergoing adaptation," says Pritchard.

The researchers analysed genetic data collected under the International HapMap Project from three distinct populations: 89 East Asians, 60 Europeans and 60 Yorubas from Nigeria. The study was published in PLoS Biology (Vol 4, No 3, March 2006).

It found evidence of recent natural selection within each population. East Asians are predisposed to a genetic mutation that interferes with metabolism of alcohol. With alcohol consumption increasing, the genetic blueprint appears to be trying to compensate for the mutation. This is evident in the strong signal of selection in the alcohol dehydrogenase cluster of enzymes that break down alcohol, the researchers say.

An interesting change was observed in "thrifty genes" that encourage efficient storage of food. Prior to modern agriculture, these genes were crucial to surviving conditions of low availability of food, but in the modern environment, these genes have been linked to obesity. The researchers found signals of selection in several of these genes, including the leptin receptor, to metabolise fats faster.

Some of the gene variants may also have undergone natural selection millions of years ago when humans and chimpanzees diverged. "But it's reasonable to suspect that a lot of these are adaptations in response to new diets and agriculture," says Pritchard. For example, genes that improve the digestion of milk have become more common, presumably since the domestication of cattle provided a ready source of milk. And as some European people have moved north to regions where there is less sunlight, genes for a lighter skin colour have increased in frequency to generate sufficient vitamin d.

Only one-fifth of the 700 genetic regions identified were shared between at least two of the groups -- the rest were unique to single populations. This supports the idea that the adaptations are recent and in response to their specific environment, says Pritchard.

Identifying the gene variants that are under selection may help medicine, Pritchard adds. That is because individuals with a newly evolved gene variant may be better adapted and less susceptible to certain diseases.