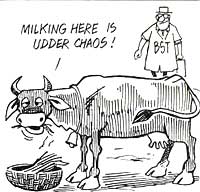 EUROPEAN Community (EC) experts are to report shortly whether the bovine somatotropin (BST) drug can be marketed freely. In making their recommendation, EC experts will not worry about safety reports, but will take into consideration the economic effects of BST-induced milk yields.

The scientific evidence against BST, one of the first agricultural products genetically engineered by firms such as Eli Lilly and Monsanto, seems to have disappeared. BST cannot be detected in the milk of cows to which it has been administered and the mastitis, an infection of the udder, reported in many of these cows is now reported to be a direct consequence of giving extra milk. EC administrators are worried that BST use could save a farmer with a 50-animal herd as much as $5,000 annually and this could prompt large and small farmers to resort to BST because practically all it takes to do so is a needle, a cow and a veterinarian.