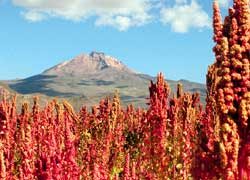 The increased popularity of an Andean grain, Quinoa (Chenopodium quinoa), as a health food in the us has brought together researchers from usa and Bolivia to find ways to boost its productivity and conserve quinoa genetic resources. Quinoa is a member of the family Chenopodiaceae, which includes vegetables like spinach and beets. Bathua, used as a leafy vegetable in India , belongs to the same group.

Scientists from Brigham Young University (byu) in the us and Foundation for Promotion and Investigation of Andean Products (proinpa) in Bolivia recently developed genetic markers to protect the plant's genetic diversity and also provide food security to the poor living in areas where it is grown. "By giving Bolivian farmers a genetically superior plant, we hope they will reap increased yields that will lead to better nutrition and potentially a new source of income," says Daniel Fairbanks, a byu researcher. Quinoa is an important food crop in South America as it contains more protein than any other grain, an average of 16.2 per cent, making it superior to other grains.