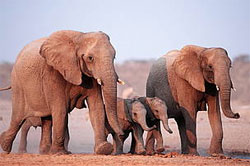 The Great Elephant Census is the first pan-African aerial survey of savanna elephants since the 1970s. Launched in February, the two year-long project would cover more than 18 countries. In the first year, the survey would be conducted and in the second year the findings will be analysed and published.

Forest elephants would not be covered in the survey as they cannot be spotted from air. Experts say that there are no accurate figures available for elephant population in Africa. A report published by the International Union for Conservation of Nature in 2007 put the number between 690,000 and 472,000. Knowing elephant population is necessary for policymaking and conservation efforts. Apart from elephants, the survey would also count the population of other large herbivores, such as giraffe and hippopotamus.

Aerial surveys have been completed in two of the 18 countries and are under way in 10. Though elephant numbers are falling in most regions, Botswana has emerged as an exception. Okavango delta in the country is one of the few regions where elephant population is rising. The inland delta was designated UNESCO's thousandth World Heritage site on June 22.
The project has been funded by Microsoft co-founder Paul Allen. The findings of the survey are likely to be published by mid-2015, says the official website of the project.

There have been several recent reports on the dwindling numbers of elephants in Africa. A report published in August said that 230,000 elephants have been killed in the continent in less than six years.

Elephants are poached primarily for tusks, and China and other Asian nations are the main markets. If the trend continues there may be no elephants left in a few decades, says another report published in August. According to a paper published in the journal Conservation Biology, illegal ivory trade has doubled since 2007 and is causing rapid decline in elephant population.