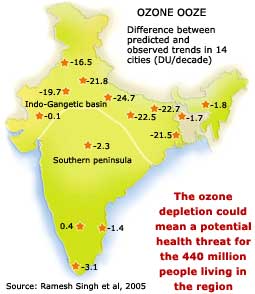 if you thought depletion of stratospheric ozone layer happens only over the polar regions, it's time you relocated your view tropically. For, scientists have found the ozone layer over the Indo-Gangetic (ig) basin is getting seriously compromised, due to, among other things, the increasing load of atmospheric pollution.

Carried out jointly by researchers from the Indian Institute of Technology (iit) in Kanpur and the George Mason University in the us , the study found the decadal variation in the ozone column over the densely-populated basin is almost three times the predicted trend for the decade ending 2003.

The scientists measured the total ozone column (toc) over 14 cities across the country using data provided by two us satellites -- Nimbus 7 (for 1979-1993) and Earth Probe (1997-2003). Ozone layer thickness is expressed in terms of Dobson Units (du). The normal range for the thickness of the ozone layer is 300-500 du. For cities in the ig plain -- Kanpur, Kolkata, Patna and Varanasi -- the values for ozone depletion predicted were 12.6, 10.8, 13.5 and 11.3 du respectively, while the corresponding actual figures were found to be 37.3, 32.3, 36.2 and 33.8 du. On the other hand, they found toc values to be more or less stable over other cities such as Guwahati, Chennai, Bangalore, Thiruvananthapuram and Nagpur.

"The results show an increase in the rate of decline of toc at several locations over western, eastern and central parts of the ig basin, while the trend over the rest of India is found to be stable," said team leader Ramesh P Singh of iit Kanpur, who is also a visiting professor at the George Mason University. Apparently, this belt of declining trend extends in both the eastern and the western sides of the ig basin. The findings will soon be published in the International Journal of Remote Sensing.

Stratospheric ozone is crucial as it absorbs sun's ultraviolet (uv) rays that are known to cause cancers of several organs in humans. In the early 1970s, scientists such as Paul Crutzen discovered certain industrial chemicals containing chlorine and bromine lead to the destruction of ozone. Subsequently, severe ozone depletion was observed every year since the early 1980s over the Arctic and the Antarctic regions.

"The depletion of ozone is a potential health threat especially to the 440 million people who live in the basin," Singh said, adding that the factors responsible for the ozone depletion need further investigation. One possible factor could be the sulphate aerosols and dust particles transported from Africa's Sahara desert before and during the summer monsoon. A study by P Bonasoni and his colleagues at the Institute of Atmospheric Sciences and Climate, in Bologna, Italy in 2001 has shown that sulphate aerosols and dust can react with atmospheric gases, including ozone.

It is believed that increasing pollution in the last 20 years has caused the temperature of the troposphere (the part of the atmosphere closest to earth's surface) to rise whereas that of the stratosphere has fallen. This may have an impact on the stratospheric ozone column. However, not much ground data is currently available to support this hypothesis.

Interestingly, a totally unrelated study by researchers at the Indian Agricultural Research Institute, New Delhi, that appeared in a 2002 issue of Environmental Monitoring and Assessment (Vol 77, No 2) showed that the 26 million hectare rice-wheat cropping system in the ig plain releases huge quantities of nitrous oxide into the atmosphere. Nitrous oxide is known to destroy stratospheric ozone. While an unfertilised plot releases 654 g n 2 o per hectare, the figure shoots to 1570 g per ha when urea is used as a fertilser -- a common practice for the two crops.

Scientists hope that some of these questions will get answered once results of a major study by the Indian Space Research Organisation and the Department of Science and Technology in the ig basin are out. As many as 70 scientists drawn from 22 institutions across the country participated in the month-long study in December, 2004 under which continuous observations were made of atmospheric gases, ozone, solar radiation and water vapour from eight different locations in the basin. Analysis of the data may throw some light on the extent of pollution in the region, says Singh.