Afforestation not so cool 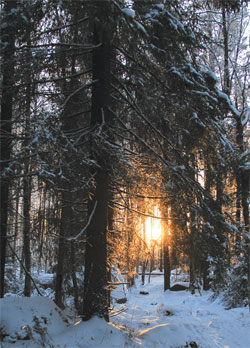 AFFORESTATION, a key climate change reduction strategy recommended by the United Nations, will not have much effect on global temperatures. Instead, if carried out in high altitudes, it may lead to climate warming, according to a study carried out by scientists in Canada.

The scientists assessed the impact of replanting forests on crop and wastelands. They found that the benefits of tree planting are marginal when it comes to stopping the planet from overheating. The study was published in June 19 issue of Nature Geoscience.

The United Nations Framework Convention on Climate Change (UNFCCC) invests in the idea that planting trees will help slow climate change and global warming. But current policies on accounting carbon credits against forestation activities do not take into consideration aspects like changes in soil surface and evapo- transpiration.

The researchers say these aspects are important as the trees do suck carbon out of the air, but their dark leaves and needles also decrease the amount of solar radiation that gets reflected by the land, this has a warming effect. Crop land, especially snow-covered, has a cooling effect because it reflects more solar energy than forests, they add. Called albedo effect this is important and needs to be incorporated into assessment of tree planting programmes and projects, the researchers add.

For the study, the team assessed the global climate system over coming decades under different afforestation scenarios using a computer model. In the most extreme case, 100 per cent of cropland on the planet was planted with trees. This resulted in only a 0.45°C reduction in global temperature by the end of the century. In a more modest scenario that grew trees on 50 per cent of existing global cropland, the temperature dropped just 0.25°C.

Temperature benefits associated with more realistic global afforestation efforts, where less than 50 per cent of cropland is converted, are expected to be even smaller, indicating that afforestation is not a substitute for reduced greenhouse-gas emissions, they conclude. Increasing greenhouse gas emissions is expected to see the average global temperature climb at least two degrees this century.

Experts say the need of the hour is to properly assess what kind of plants will provide maximum results in terms of carbon sequestration—removing carbon from the atmosphere and storing it— and in what regions. “It is clear from this study and many others that emissions from fossil fuels are the most important way to achieve the climate targets of stabilised greenhouse gas concentrations and limit the global mean temperature increase,” says Rik Leemans, Environmental Systems Analyst at Wageningen University in The Netherlands. He adds that carbon-sequestration does help but is not the only solution.