Wards off stomach ailments and cold

In most Afghan households, winter is heralded by the strong aroma of fried mint leaves that lingers till late in the night. The smell is a sure give away of what a family has had for dinner—Aashak, a speciality dish of Kabul comprising dumplings and noodles. 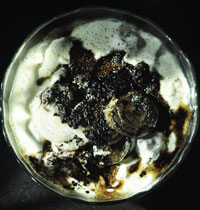 The dumplings stuffed with leeks and cooked with noodles into a soupy consistency are usually topped with a spicy beef sauce. But most families from Kandahar and Kabul now living in India have improvised the dish and made it vegetarian. The beef sauce has been replaced with a sauce made from cooked kidney beans or chickpeas (see recipe). The sauce is poured over the dumpling and noodles and topped with thick curd and onion rings.

Dried and powdered mint is fried in hot oil and poured over this dish as the final garnishing. It is this mint that gives the otherwise bland dish its distinct taste and aroma. Aashak is a complete meal in itself but can also be eaten with naan (flat, oval-shaped bread made from refined flour) or rice.

My grandmother spends hours making the dumplings and noodles using whole wheat to maintain Aashak’s nutritional value. But my mother’s generation of Kandaharis living in India has moved on to the readymade maida (refined flour) noodles and macaroni available in the market. A popular dish served in Kandahari gatherings in India, Aashak may have evolved into a less-fibrous, more starchy dish, but my grandmother still swears by it. “The mint dressing is most important for taste and medicinal value,” she insists.

Mint is integral to Kabuli and Kandahari cuisine as it provides relief from indigestion, stomach cramps and nausea, often caused by contaminated water. In winters, the herb is used as a dressing for Aashak and in summers it is consumed with buttermilk. Afghan immigrants in India depend on this herb grown in their kitchen gardens to ward off cold. Putting the dried and powdered mint in hot oil is said to release the essential oil in the leaves which is more beneficial.

Scientific studies conducted on various species of mint confirm what my grandmother knows from experience. A study conducted by G C University in Pakistan on four species of mint found that the herb has antimicrobial property or the ability to kill or inhibit the growth of microorganisms such as bacteria, fungi and protozoans. The study published in August 2010 was based on tests using essential oils extracted from mint. Another study by the biotechnology department of Gulbarga University in Karnataka in October 2009 found that rats and mice injected with mint showed “significant activity against gastric ulcer and acid secretion”. Reason enough why Aashak should be added to every Indian household menu. 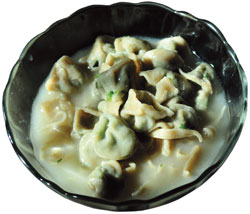 Sift salt with flour, add a little oil and knead it into a hard dough with water.

Roll out the dough into a thick layer and cut about 1 inch diameter circular wrappers. Fill one half of each wrapper with a few slivers of leek rubbed with a little salt. Brush the edges of the wrappers with water, fold and seal to get half moon-shaped dumplings. Use half the dough to make noodles using noodle machine or cut 1 cm wide flat noodles with knife.

Boil dumplings and noodles in two glasses of water. Add salt. Simmer for 10 minutes. Pour the soup in a bowl. Garnish with curd and sliced onions. Heat four table spoons of oil, add mint. Remove immediately from fire and pour mixture over the curd.