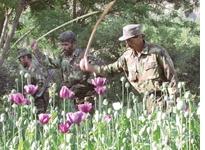 Afghanistan is once again under pressure from the us government to implement a controversial counter-narcotics plan for eradication of its poppy fields. As per the us plan, Afghanistan should spray poppy fields with a crop-killing herbicide, much as is done with coca in Colombia, and develop new sources of income for poppy farmers.

In 2006, a similar us government plan was rejected by President Hamid Karzai, following health concerns raised by the country's public health ministry over the possible side effects on farmers and local residents. Spraying could destroy livelihoods of three million farmers, fear the authorities. A us delegation is expected to present fresh proposals of safe spray, with no side effects.

Meanwhile, Senils Council, a group based in Europe and Afghanistan, has proposed legalising and managing poppy crops, by turning them into medicines like morphine. It has proposed to set up morphine factories, which will also provide income to poppy farmers.