There were two deaths and 1,000 reported infections in the country, as of March 27

A sign being put up outside an office in South Africa after the lockdown was announced Photo: Engela Duvenage

There was no swanky dinner nor an audience to applaud the winners of the South African Dairy Championships for the first time in 187 years.

The champions were announced via a Facebook broadcast March 26, 2020, in another first for Africa’s largest dairy competition.

The decision was not for novelty, but an innovation under pressure. The event was held 12 hours before South Africa went into a 21-day lockdown because of the novel coronavirus disease (COVID-19) pandemic.

Drastic measures to curb the spread of the virus through social distancing were announced 11 days earlier by Cyril Ramaphosa, the country’s president.

“Luckily, the judging phase of the competition was already over before the first case was recorded in the country on March 5,” said Isabeau Botha, corporate communication manager of Agri-Expo, the organisers of the South African Dairy Championships.

“If all the judges had already been self-isolating or in lockdown, it would have been near impossible to organise a tasting of the more than 900 cheeses, yoghurts and ice creams entered,” she said.

Agri-Expo, however, had to cancel their annual South African Cheese Festival, which attracts 30,000 visitors and 200 vendors.

Such festivals and event organising — including all the vendors and service providers involved in such endeavours — are but two of the many industries that are set to suffer serious financial blows in the coming months.

The lockdown means South Africans may not venture out of their homes to exercise or walk their dogs. They may do so only for basic shopping, medical emergencies or if they provide essential services.

Essential services include those involved in the production of food, medical staff, electricians, plumbers and those working in gold and coal mines or for companies making and distributing food, basic goods and medical supplies.

All but essential supermarkets, pharmacies, veterinarians, laboratories and petrol stations are open. Flight and train services have been stopped. Motorists must have written permission to show to members of the police or army that have been deployed to manage the lockdown. The country’s courts remain open.

Bheki Cele, South Africa’s minister of police, hopes a ban on the sale of alcohol would help decrease incidents of violence and keep free much-needed space in hospitals during the ensuing crisis.

This is what the lockdown is about: To flatten the curve and contain the spread of the virus in South African communities and as a result, help the country’s already stretched health sector cope with the onslaught of cases needing critical care.

No elective surgeries are being done during the lockdown in the county’s hospitals.

“This frees up a lot of resources, especially in the private sector,” said Kerrin Begg, of Stellenbosch University and a member of the country’s Western Cape province outbreak response team. 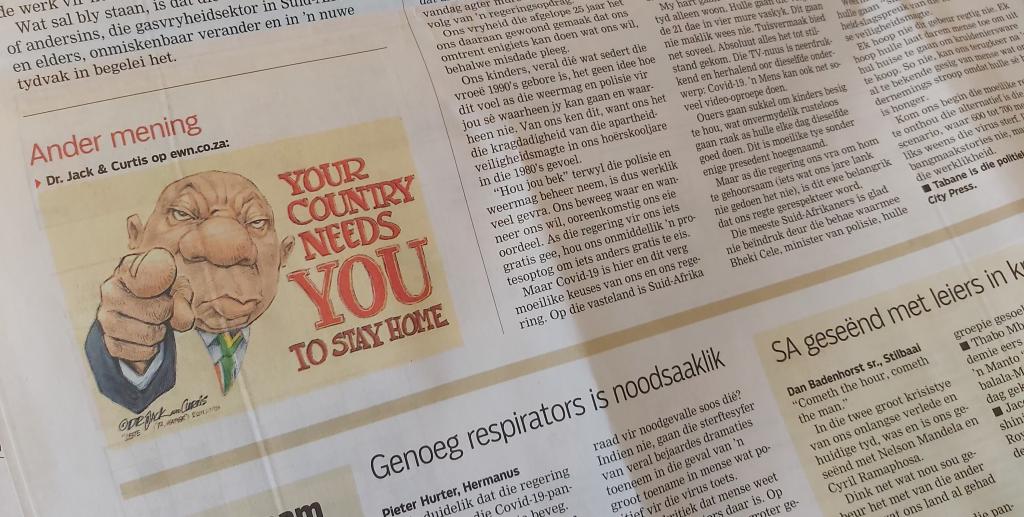 A cartoon of Cyril Ramaphosa in a South African newspaper Photo: Engela Duvenage

Teams in all of the country’s nine provinces were providing emergency refresher training to medical staff, according to her.

Healthcare workers are being taught how to contain the spread of the novel coronavirus (SARS-CoV-2) and aspects like sterilising ventilators and other equipment.

COVID-19 is a disease, transmitted through droplets, like tuberculosis — another disease South Africans are prone to.

“Staff who have experience working in South Africa’s tuberculosis hospitals or with many TB patients will probably be best equipped and prepared to be handle the crisis,” said Begg.

The country’s healthcare workers knew to wear masks at all times, wash their hands regularly, ensure good ventilation and the importance of cleaning ventilators before using it on new patients, she added.

The stance taken by South Africa was stronger than those of countries like the United Kingdom and United States, said Denis Chopera, a program executive manager for the Sub-Saharan African Network for TB/HIV Research Excellence based out of Durban.

“When the human immunodeficiency virus (HIV) emerged in South Africa in the 1980s, the country took a backseat on handling it. By the time we fully responded, it was too late,” Chopera, who is a medical virologist, said.

Approximately 20 per cent, or eight million South Africans are infected with HIV, the highest infection rate in the world.

Those who are HIV positive are prone to tuberculosis, something that is a cause for concern, Chopera said.

Underlying factors such as diabetes could cause a severe outbreak, according to him.

“One also has to wonder how effective self-isolation in lockdown will be in our informal settlements, where big families live together,” he added.

He is, however, hopeful that the strong measures — along with factors such as a warmer climate and a younger population — will see South Africa through the pandemic.

“We previously learnt the hard way that we need to be at the forefront when trying to curb a virus,” he said.

One thing is however certain: South Africans will be facing the pinch financially in coming months.

Some were sent into lockdown without pay or without the security of a job or business to return to.

Marzanne van Loggerenberg, owner of a beauty salon (deemed as a non-essential service in lockdown terms) in Wellington, close to Cape Town, said the pandemic has already had “a devasting effect” on her business.

Relief measures — such as a solidarity fund to help cushion the impact on small businesses and some tax relief were announced — in the months ahead.

Price controls are in place on pandemic basics such as toilet paper, disinfectant, face masks, and staple foods such as rice, pasta, long-life milk and sugar.

The lockdown was “the blow that kills the working class and not the dreaded COVID-19”, according to a Cape Town community leader, Abdul Karriem Matthews.

He said it reflected the glaring class, racial and gender divisions of South Africa. The plan was partial towards big business and the formal economy, according to him.

“The plan does not speak about the thousands of informal traders, mostly women, who will be unable to access funding. It does not include the millions of South African who have no food security,” he said.

He called for a plan for the mass production and distribution of face masks, sanitisers, soap and food for the lockdown period, directly delivered to the working class and mass mobilisation of all state resources to help them.