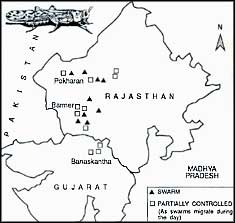 African locusts, which have been infesting parts of Gujarat and Rajasthan since mid-July, are keeping pest control experts on their toes. The agriculture ministry has pressed into action two helicopters and a Vayudoot aircraft, armed with sprayers and insecticides, to fight the locusts that rode a cyclonic storm from Oman and Saudi Arabia to India.

The locusts have been reported in the desert areas of Barmer and Pokharan in Rajasthan and Banaskantha in Gujarat. Local pest control experts first sprayed insecticides from the ground. But now, they are spraying insecticides from the air at night, explain experts, because, as the locusts settle down at that time, they prove easier targets.

Locusts are a major threat to agriculture and locust invasions have been known to clean entire regions of crops and plants. In India, major locust swarms have appeared at least 13 times since 1861, the last time in 1988. In 1962, locusts devoured cotton crops worth Rs 1.5 crore, spread over an area of 4,000 ha. In 1978, the loss incurred by the locust invasion was limited to Rs 5 lakh, while in 1988, an agriculture ministry spokesperson says their control measures ensured the loss was negligible.