Survival is the only business that thrives in an ailing continent 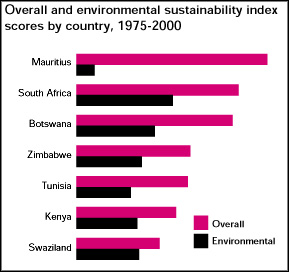 • Only three countries, accounting for 6.5 per cent of the continent's population, have recorded relatively high overall sustainability during this period

• Environmental sustainability has gone down in Africa considerably, with a brief recovery during 1996-2000

• Africa contributes just two to three per cent of the world's carbon dioxide emission from industrial and energy sources, but suffers more from climate change, resulting in more droughts, floods and cyclones

• Its wilderness will vanish in the next 50-100 years, as climate change will make it impossible for wild organisms to survive in this continent

• Africa carries the highest disease burden in the world. An unprecedented 30 per cent of this burden is due to environment-related diseases like malaria and respiratory infections

• Its ecology naturally supports infectious diseases, but the lack of access to sanitation, medical care and the rising poverty levels compound the problem

• In several countries, HIV/AIDS has reduced life expectancy by more than 10 years. Life expectancy will never rise above 55 years due to bad health services

• Among the top five countries in the overall sustainability rankings, average life expectancy has declined by about three years between 1985-94 and 1995-2000. Among these countries, Botswana, South Africa and Zimbabwe are worst affected by HIV/AIDS