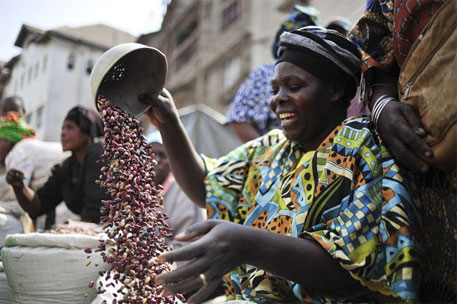 Ministers across Africa have renewed their call for a strong universal climate change agreement and an increased flow of funds to fulfill the continent’s development aspirations, a report says.

As nations worldwide are ready to approve a new climate change agreement under the United Nations in Paris later this year, the ministers highlighted the region’s readiness and requirements for accelerated private and public financing for carrying out low-carbon development, the report published by the African Development Bank Group (AfDB) reads. It is a financial institution aimed at contributing to the economic development and social progress of African countries.

“I agree with the ministers that the last 10 years in the implementation of the Clean Development Mechanism (CDM) is a very valuable asset and that market mechanisms can play a significant role in raising the level of ambition and supporting climate action, said Hakima El Haite, the minister in charge of environment in Morocco.

It is a fact that Africa, with its vulnerable communities and vast potential, has perhaps the most to lose from climate change and the most to gain from an effective climate change agreement.
“In these last eight months before Paris, focus must shift from restating negotiating positions to finding common ground solutions,” said United Nations Framework Convention on Climate Change (UNFCCC) Deputy Executive Secretary Richard Kinley at a daylong ministerial segment at the Africa Carbon Forum 2015 hosted by Morocco.

The Africa Carbon Forum 2015 (April 13-15) held in Marrakech, Morocco, focused on programmes to boost private sector finance and other forms of climate finance to bring about sustainable development in the region.

According to the International Energy Agency, over 620 million people in Sub-Saharan Africa are without secure access to electricity. Some 730 million people still rely on cooking mostly with wood which affects their health and destroy forest cover.

“The coming months will provide African countries with a significant opportunity to align their contributions to the Paris climate agreement with their own long-term sustainable development priorities,” Kinley added.

At present, countries are busy detailing their Intended Nationally Determined Contributions (INDCs) which they will submit as their input to the Paris agreement. INDCs for 35 countries have been submitted till date. On April 1, Gabon became the first African country to submit an INDC.

What did the participants say?

Two clear messages emerged from the participants at the forum. First, climate finance linked to results is essential to stimulate greater funding for both mitigation and adaptation to climate change. The second is that developing countries need tools to anchor carbon markets in long-term climate agenda.

Another theme which came up during the forum was the need to preserve and improve CDM beyond 2020 as a tool for providing continued climate finance and technology to developing countries.
The participants also highlighted the usefulness of CDM’s established rules in measuring, reporting and verifying results and its role in defining the content of INDCs.

The workshop concluded that African countries could look at how best to link and leverage finance through the Green Climate Fund at the same time as increasing the use of CDM.

The forum highlighted that the INDCs provide Africa with an ideal vehicle through which public policy developments can be transparently displayed by countries to shift towards a low-carbon and sustainable development.