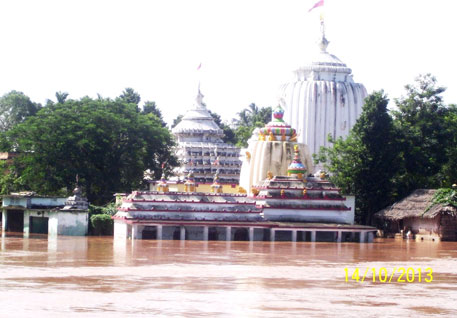 Around 1.6 million people from Â´â•—â”cyclone-hit Â´â•—â”villages in Odisha continue to battle floods triggered by incessant rain that followed cyclone Phailin.

The rivers Budhabalanga, Bansadhara, Baitarani, Bramahani, Kani and Rushikulya are in spate and have brought more misery to homeless people. The districts reeling under flood are Kendrapada, Balesore, Bhadrak, Ganjam , Keonjhar and Mayurbhanj.

River Baitarani has crossed the danger mark in Anandapur in Keonjhar district and Akhuapada in Jajpur district. The river Rushikulya is also flowing over the danger mark in Madhababarida and Purosotampur. Flood water also entered Baripada town on Monday night.

Families in flood-hit villages have now taken refuge under temporary shelters made of plastic sheets held together using bamboo poles. They are using straw mats as a shield from muddy ground and some flickering candles and kerosene lamps to light these tents. People spent sleepless nights keeping a vigil and the absence of relief measures from any concerned authority in the area even forced some of them to fend for themselves.

Udaya Das from Petapada village in Kendrapada district, whose house has been badly damaged, said he sat awake through the night on Monday, and companied that not even a tent was made available. "It rained almost throughout the night, so you can imagine our plight," he added.

Vast stretches of standing crop have been washed away by water while power and communication lines have been snapped by the strong gales. No electricity means that most of the distraught villagers have little or no information about the situation in other neighbouring areas. 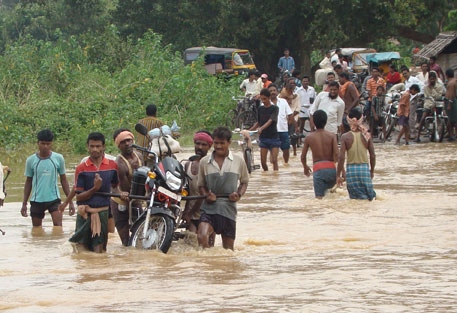 "We were unable to go anywhere and have been starving for two days now. All we had to eat was some flattened rice. The rain added our woes," said Harihar of Salagaon village in Mayurbhanj district.

“Most of the flood-affected villagers now feel overpowered by nature’s fury. The flood has left them devastated. They feel that they would never be able to lead normal lives again,” said Rabindr Behera of Bari village in Jajpur district.

Slamming the government's claims that relief measures are in place, those affected said that they had not received any help.
Besides food supplies, people also have no access to clean drinking water. Ranjan Samal (65) of village Kalasapur, brought a glass of water and said with tears in his eyes, “I do not want you to drink this water but just taste it.” A sip was enough to make one spit it out. He said, “We are unable to cook our food in this salty water. Kindly give us clean water”, pleaded Ranjan.

In many areas, people are marooned due to non-availability of boats. The authorities have failed to rescue a large number of flood-affected villagers and many of the stranded people are now depending on the rickety country boats to reach safer places.

Odisha Revenue and disaster management minister Surya Narayan Patro said “1.6 million people are stuck in the flood water in the state. Twenty one persons have perished in the cyclone and five have died in flood till Tuesday. We have evacuated almost half a million villagers to safer places." 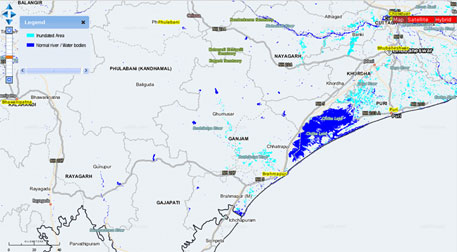