More than 800 children have been affected by the infectious disease 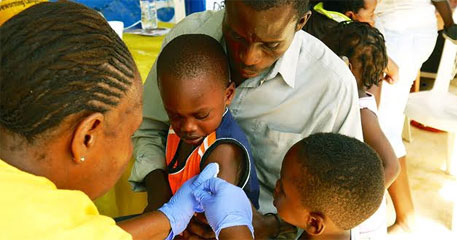 Just when Liberians thought the worst was over, they were proved wrong. After struggling to fight the deadly Ebola virus, Liberia is now dealing with another outbreak: measles. Over 850 cases have been reported in the past six months, according to a World Health Organization (WHO) report.

The Ebola virus disease led to the collapse of most health services in the country, including routine vaccination. A measles campaign scheduled for 2014 was suspended. This left thousands of children susceptible to the highly infectious disease. This month, in an effort to contain the spread, the Liberian government, in collaboration with WHO, US Centres for Disease Control and UNICEF, started a week-long vaccination camp from May 8-14, the first in the aftermath of Ebola.

One of the main challenges for the vaccination teams was reaching the outlying districts before the onset of the rainy season. The organisers succeeded, and thousands of children under five were immunised against measles and polio and administered deworming medicine. But new cases are still emerging, the report says.

Another challenge was to convince parents to bring their children to the health centres. Liberia was hard-hit by Ebola and borders Guinea and Sierra Leone, where transmission from the virus continues, notes WHO. The vaccination camp was started a day before Liberia was declared Ebola-free. Parents, therefore, were apprehensive about taking their children to health workers who had cared for Ebola patients, fearing reintroduction of the deadly virus.

Following such concerns, the Liberian government took extra care to reduce the risk of infection by providing extensive training to vaccinators, campaign supervisers and monitors. Hand-washing stations were placed at the entrance of every vaccination post and temperature checks required of all children and their caregivers. All supplies that touched a child during vaccination were used only once in the campaign. Vaccinators were required to change protective gloves for each and every child and use disposable syringes and droppers. Children were also given deworming medicine in disposable plastic cups.