After Gujarat, more states to harness solar power from canal-top 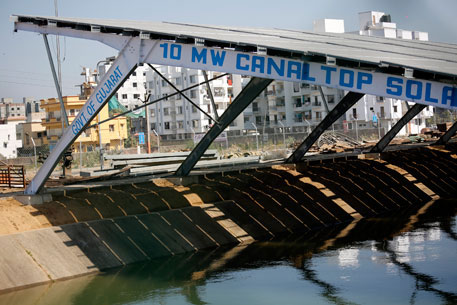 After the success of the canal-top solar plant in Gujarat, more states are planning similar projects. The Gujarat State Electricity Board’s 10 megawatt (MW) plant is built over a 3.6-kilometre stretch of the Sardar Sarovar Canal System. During the inauguration of this 10 MW plant in January this year, the Central government announced it would promote similar projects in other parts of the country and sanctioned Rs 228 crore to construct 50 MW of canal-top and 50 MW of canal-bank solar projects. SunEdison, one of the biggest solar power companies, based in the US, had also commissioned a 1 MW plant on the banks of the Krishna river for the Karnataka government.

Earlier this month, Haryana government announced the start of extensive feasibility study for the state to develop canal-top solar power project. “We are working to adopt the ‘green power generation’ project as commissioned by the Gujarat government on the Narmada River. Surveys by experts from HAREDA [Haryana Renewable Energy Department] and irrigation departments are under way to find suitable places across the state to place solar power grids,” HAREDA director Balraj Singh told media.

An official of the irrigation department says such innovative renewable power generation options may also reduce wastage of water on account of evaporation during summers. “But it will be a challenge to protect the expensive glass panels and other metal structures stationed in the isolated locations.”  According to Sardar Sarovar Narmada Nigam Ltd, the 10 MW Gujarat plant has saved on 16 hectares of land, and will potentially prevent 90 million litres of water from evaporating each year.

The Haryana government says power generated from these plants would be costlier than the average solar power plant because of the cost of peripheral structures. The Union Ministry of New and Renewable Energy will play a key role in the HAREDA project.

Another state to take cue from Gujarat is Odisha where the Odisha Hydro Power Corporation (OHPC) Limited has proposed to set up canal top solar power plants on experimental basis. “We are going to set up solar power plants on a 10 km length canal stretch on pilot-basis. The process of identification of suitable canal stretches has been undertaken.” says Prakash Kumar Nanda, Superintending Engineer. The water resource department is looking at Rengali irrigation project, Subarnarekha irrigation project and Puri canal to identify suitable space.

Canal-top projects have unique advantage of not using any land. In a country like India, land is scarce and heavily contested. So, these projects provide an alternative and also save water.

However, all the projects that have been installed have been financed entirely by state governments. So, finance is a key. The first MW installed on Sardar Sarover in Gujarat was estimated to cost Rs 17.71 crore. The cost of generation of power was Rs 6.20 per unit. Central Electricity Regulatory Commission announced the benchmark for levelized tariff of solar PV (tariff realised over the span of the project) at Rs. 6.86 per unit at the capital cost of Rs 12 crores per MW. The question is whether these projects can be commercially viable without the support of government subsidy.