After US, deadly pig virus a big threat in Europe 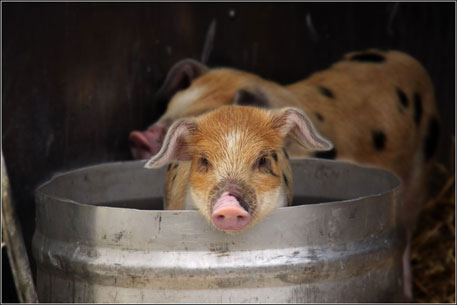 A virus that has killed some seven million piglets in the US in the past year has now raised alarm in Europe. The European Union imports 2.2 tonnes of pig blood from the US, which is the largest exporter of pork.

Porcine Epidemic Diarrhoea Virus (PEDv), which affects the pig's gut, appeared last year; it has also been found in Canada, Mexico and Japan. While the virus isn't harmful to humans or food, countries are worried about its economic impact. France, for instance, had proposed to suspend imports of pigs and pig by-products from the US. The move was being seen as a reaction to lax efforts by the European Union.

In a more recent development on Tuesday, the EU Commission, decided against an outright ban on pig byproducts. It imposed new rules that include a requirement that any pig blood product imported to the European Union for use in pig feed must have been treated at 80°C and then kept in storage for six weeks at room temperature to ensure any PEDv is deactivated. France, for now, has decided not to impose any separate restrictions.

How the virus spreads

The highly contagious virus is known to be transmitted among pigs through faeces, but the possibility of a link with pig blood products used in feed is not proven, and scientists continue to search for its origins and a cure.
PEDv was first identified in the UK in 1971, but that strain was a milder form and pigs quickly adapted to it and became immune. According to the World Organisation for Animal Health (OIE), the disease is believed to have its origins in China.

Experts also believe that lax biosecurity is one of the major reasons behind the outbreak. In June last year, a study by US non-profit AVMA had found that 17 per cent of trucks going into a slaughterhouse were positive for the infection and 11 per cent of the trucks that had been negative when they went into the slaughterhouse were subsequently positive when they left.