Dharam Prakash is an anti-injections doctor and kids love him 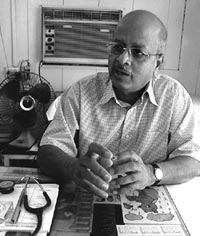 It is rare to hear the wail of a child about to be given an injection at Dharam Prakash's small clinic in Ashok Vihar, Delhi. Reason: in the 30 years that he has been practising, this doctor has rarely used injections, not even in extreme cases. For instance, twelve-year-old Vishakha of Sabji Mandi was terribly afflicted with gastroenteritis in July this year. Prakash gave her oral medicine, monitored her condition for an hour and made her suck on an orange bar (to take care of dehydration). Within three days, she was cured: no hospitalisation, no intravenously injected glucose drip, none of the staples of the regime most doctors suggest. His meticulously maintained records of patients show how consistent he is in this regard. Two-year-old Arjun of Bharat Nagar is an asthmatic, yet has never been injected with steroids or bronchodilators; he inhales his medicine through a nebulizer. Then there is 30-year-old Rahul, one of Prakash's first patients. He's had gastroenteritis, fevers and chest infections all through childhood, but was never given an injection.

In the medical profession, strict guidelines suggest that an injection should be administered only when a child is very sick, when the oral version of the medicine is not available or the child is unconscious and so cannot take medicine. Also, reducing injections is a safety procedure the World Health Organization promotes -- worldwide, unsafe injections cause 42 per cent of hepatitis c cases, 33 per cent of hepatitis b and 2 per cent of hiv infections yearly. Such reduction isn't difficult, considering that more than 90 per cent of injections administered are only for curative purposes, and 70 per cent of such medicine exist as oral formulations.
But Prakash's inhibition is personal. He feels he loses control on the medicine once it is given as an injection. An injected medicine remains in the body even if it is naturally rejected, so that he's afraid of possible adverse reactions. This is why he spends more time educating parents on how the medicines can be taken orally; he's even tried to find better tasting syrups. Since all medicines children need are available as syrups and tablets, his task was made much easier.

The only shots his patients receive are immunisation shots. Curative injections are used only when the child is very small and cannot digest the medicine or children suffering from extreme cases, such as septicaemia or renal colic (kidney pain). The number of injections can be reduced even in the case of immunisation -- from nine jabs to just three if more expensive combination vaccines are used. "You have to make the parent understand why you are not giving the medicine," says Prakash. In his experience, ninety per cent of parents understand this. He feels it is imperative to involve parents. It also works to ask the children what they want -- it is not likely, Prakash belives, they would go for an injection.

Reducing the jab requires educating both patients and doctors. Education does help -- a study carried out in Indonesia shows that a two hours counselling of patients and doctors resulted in significant decrease in injection use from 69.5 to 42.3 per cent in the intervention group, compared to a decrease from 75.6 to 67.1 per cent among controls. But the current medical regimen is such that injections are considered an imperative. Patients prefer injections, believing they will recover faster. Doctors, too, prefer to administer injections; they make more money and increase patient dependence. Quick recovery of the patient is also important for doctors trying to establish themselves. But Prakash clearly isn't of this ilk. Says Madhu Dhar, whose 10-year-old son Karan recently had hepatitis, "If the injection is not needed why want it to be given?" Guess who their family doctor is.