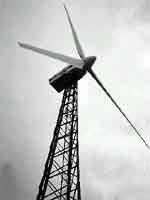 wind mills that once flourished for over a decade on the outskirts of Nagercoil town, Tamil Nadu are showing signs of decline today. Subsidies and tax benefits from the government which encouraged companies to set up projects are today no longer attractive. As a result, labourers are finding themselves jobless and are migrating to other villages in search of employment.

The first wind mill started operation in 1987 in Aralvaimozhi near Nagercoil. Subsequently, 1200 wind mills were set up in more than 2025 hectares of land. In 1995, 500 new units were commissioned. But since then, there has been a drop in the setting up of new units. In 1996 around 100 were set up and last year only 60 units were set up.A"Factors such as constant change in the government policies, frequent fluctuations in the power supply to the wind mills and the sudden increase in the price of land are the reasons for the sudden impasse," says Senthil Raj, a leading wind mill developer.

According to experts, the five kilometre stretch of land from Aralvaimozhi to Palavoor near Nagercoil is best suited for the maximum generation of power as strong winds blow throughout the year. On an average a 250 kw wind mill generates more than five lakh units every year.

The total cost involved in setting up of a 250 kw wind mill is around one crore rupees. Until recently, the government offered generous subsidies and tax relief for companies wanting to set up wind mills. A 100 per cent depreciation was provided and a 15 per cent subsidy was also given. Moreover, the Tamil Nadu Electricity Board (tneb) purchased the electricity generated at Rs 2.35 per unit or they adjusted the power used by the owners of these wind mills if they had set up any factories in Tamil Nadu. Despite the huge investment, companies from various parts in the country took full advantage and set up wind mills.

But now the subsidies and other benefits do not look very attractive for wind mill developers. What has made matters worse for investors are the land brokers. Land prices, which till recently were inexpensive have skyrocketed overnight. According to tneb rules, at least 75 cents of land (also known as one point) is required to set up a wind mill. One point of land which was available for Rs 30,000 a few years back is today more than 10 lakh rupees. Frequent fluctuations in the power supply and constant power cuts have damaged the imported wind mills - for which the availability of spare parts is rare, says Raj.

"We all were under the impression that a lot of jobs will be created with the setting up of new wind mills. But nothing has happened. The only people who have benefited are the big companies who have set up these mills to get tax exemption," says Arumugham, a labourer working in the area. He says that even though there is enough land to set up another 600 new wind mills, few companies are coming forward because the government has drastically reduced the incentives. "We have to go for work in the nearby villages for our livelihood," says a dejected Arumugham.