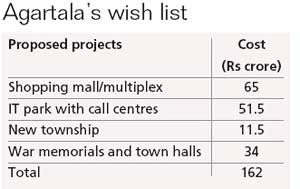 But not with urban renewal funds, says Centre; rejects its plan

THE Centre said no to Tripura's plans to build urban complexes saying they don't qualify for central assistance.

In 2006, the state government sent a city development plan to the Union urban development ministry seeking funds to build malls, multiplexes and town halls in the capital city, Agartala. The Left Front government had engaged an international consultant to prepare the urban renewal plan that sought investments totalling Rs 1,518 crore for the city. Of this, over Rs 162 crore was earmarked for buildings intended to put the city on par with Ahmedabad and Cochin.

The Indian Institute for Public Administration that reviewed the city development plan said projects such as malls and information technology parks ought to be taken up by private entrepreneurs.The plan was submitted under the Jawaharlal Nehru National Urban Renewal Mission (jnnurm), which aims to make cities economically productive, efficient and responsive to people's needs. "The construction of the town halls, that too three, in a small town like Agartala (measuring less than 65 sq km) is not only outside the ambit of jnnurm but is also not justified," the institute said. The only jnnurm proposal cleared by the ministry for Tripura till now is a water supply extension project in northern part of the city costing Rs 78 crore. The state urban development minister Manik Dey said there is no scope for private funding of infrastructure projects in Agartala.