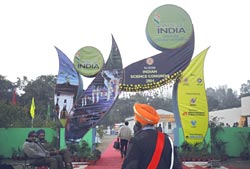 Rosy promises to make India a developed country by 2020, and shedding crocodile tears over the young generation's lack of interest in science were the highlights of the 91st session of the Indian Science Congress. The meet, held in Chandigarh from January 3-7, 2004, would be remembered for the non-participation of many prominent scientists and patrons of science, including Prime Minister Vajpayee. The cold wave sweeping the city, or rather the much colder attitude of political and scientific leaders, ensured lowest-ever participation in the annual event, despite the session's catchy focal theme: 'science and society in 21st century: quest for excellence'.

A popular theme is not a good enough incentive, pointed out some scientists. "You do not miss much even if you skip a session, as year after year you see the same set of speakers delivering keynote lectures," said a senior scientist from the New Delhi-based National Institute of Immunology. A researcher from the Indian Institute of Technology, Guwahati, who received the young scientist award at last year's congress, also confessed that attending such events is a waste of time.
Even the Prime Minister's inaugural speech (read out in his absence) proved to be disappointing this year. It mentioned only a few pertinent issues -- the 'bureaucratisation' of scientific institutes and the under-utilisation of research funds. For several programmes and projects, even available funds were not sanctioned or used in time, stated Vajpayee. Ironically, he failed to make a passing reference to the apathy shown by his own cabinet towards science and technology. A classic example of the indifference is the fate of the Geological Survey of India (gsi), a 200-year-old premier earth science institute. gsi's parent ministry, the Union ministry of coal and mines, has seen eight ministers and twice the number of secretaries in the past four-and-a-half years. Such frequent change of top leadership has discouraged gsi scientists, along with confusing them about research priorities.
Conceivably, this is the reason why the young generation is no longer interested in the scientific arena. Ironically, the science congress saw a large number of superannuated scientists receiving awards and delivering most of the keynote and plenary speeches. "All these senior scientists are like banyan trees. They give a lot of shade but do not allow any independent growth," revealed a delegate. Asis Datta, general president of this year's congress, cited empowering of young scientists as an area requiring immediate attention. "If the corporate world can have young chief executive officers, why should science be far away?" he asserted. He proposed that the knowledge of retired scientists and technocrats can be tapped by employing them as teachers in schools and colleges.

Such ideas could have been discussed thoroughly if leading scientists had attended the congress. The three scientific government departments -- department of space, department of atomic energy and the Defence Research and Development Organisation -- that cornered almost 60 per cent of the Rs 14,670 crore allocated for research in 2003-2004, were missing in action. The heads of these high-profile scientific agencies chose to stay away. Similarly, the Indian Council of Agricultural Research, which boasts of having the largest number of scientific personnel in the country, decided to be content by sending one of its eight deputy-director generals, despite the subject of plant science accorded prominence in the meet attended by about 4,000 delegates.
Not very long ago, the annual sessions of the congress used to be a forum for meaningful deliberations on science and technology policy matters. They also provided scientists with a platform to present their latest findings. Even this time, subjects ranging from agricultural to medical sciences were covered in various sections. But, the quality of papers presented left much to be desired, most scientists admitted. This time the scenario was the worst, with scientists mostly mulling over old scientific achievements.

For the first time, the authorities also decided to do away with the presentation of an 'Action Taken Report'. The report, generally presented by the secretary of the department of science and technology, informs the congress about the actions initiated on the recommendations made at the previous session.

If such important aspects continue to be ignored in future sessions, then the need for hosting the event would be certainly questioned. It seems that only a complete overhaul will help the biggest scientific event of India get back its long-lost prominence.