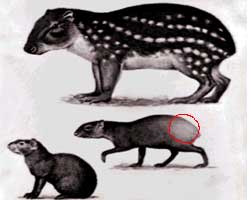 coat colour in mammals comes high on the list of genetically encoded characters that have been studied in detail. The reason is, of course, that colouration is an extremely obvious trait. Because it is small and reproduces rapidly, the mouse has been a popular animal for such studies.

There are at least five major genes involved in the determination of coat colour in the mouse. The one most familiar to geneticists -- when mutated it can cause a variety of diseases including obesity, noninsulin-dependent diabetes and a susceptibility to tumour formation -- is known as agouti . The agouti gene is responsible for the typically 'mousy' look of mice, identified by a band of yellow on the hair shaft. In a non-agouti mouse the band is missing and the coat has a solid black appearance. The 'mousy' or agouti look is also found in squirrels, rabbits and wolves.

Recent advances in our understanding of how the agouti gene can be involved in so many outcomes have been discussed by Jayanthi Manne and colleagues of the Jefferson Cancer Institute in Philadelphia, us . The mouse agouti protein is made up of 131 amino acids (the human and mouse proteins are 80 per cent identical). It is expressed by cells in the hair follicle and acts on neighbouring cells known as melanocytes, leading them to initiate pigment production near the base of the follicle. The melanocytes themselves do not make the agouti protein. Uncontrolled production of protein results in coat hairs with a yellow-to-red pigment level; its absence leads to the synthesis of a black-to-brown pigment. Curiously, mice entirely lacking in a functional agouti protein seem to lead normal lives ( Proceedings of the us National Academy of Sciences , Vol 92, 1995).

Transgenic mice have been developed that carry a foreign agouti gene under the control of a regulatory element that can activate the gene anywhere in the body -- and not just in cells in the hair follicle. These mice become obese and have abnormally high levels of insulin (and an excess of sugar in the blood, but only in males), precisely the traits seen in dominant agouti mutations. Therefore, it appears likely that the mutation causes ubiquitous overexpression of the gene.

Curiously, the agouti protein bears a resemblance to toxins produced by snails and spiders. The resemblance suggests that the mode of action of agouti might be similar in some respects to the manner in which these toxins act. If true, this would indicate that an initial step in the mode of action of agouti involves a change in cellular calcium levels. The expectation seems to hold good: there is a significant difference in calcium levels in muscle fibres taken from mice with different combinations of agouti genes.

The calcium ion plays a central role in the process whereby changes in the external environment affect the interior milieu of the cell. Therefore, the observation that the agouti protein affects cellular calcium gives an interesting clue regarding its probable mediatory role in diseases. Initial data support this line of thinking: persons who are diabetic, hypertensive or obese tend to have elevated levels of calcium in their tissues. It may be that different genes at the agouti locus cause different levels of predisposition to one or the other disease.