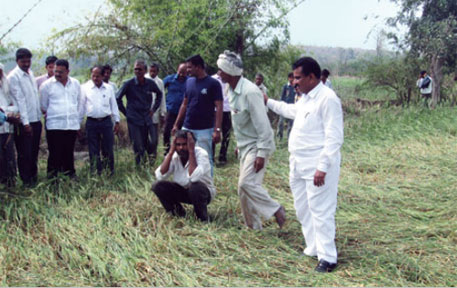 Finance Minister Arun Jaitley got the diagnosis right when he said in his budget speech that the country’s farmers are struggling with “declining agriculture income” and “farm distress”. But the pill he prescribed for the malady is hardly going to help, say experts.

In the budget, Jaitley increased the farm credit corpus from Rs 8 lakh crore to Rs 8.5 lakh crore and announced the setting up of a Unified National Agriculture Market to provide farmers better price for their produce. The new market, he said, will replace the state-run Agriculture Marketing Price Committees (APMCs). Currently, 2,477 principal APMCs exist across the country; these regulate 4,843 sub-market yards. But they benefit just 8 per cent of country’s farmers, according to the Shanta Kumar committee report released in January this year.

“I was expecting better pills for the challenges pointed out by the finance ministry. Replacing APMC by another body is not going to solve the problem,” says Devinder Sharma, agriculture and food policy analyst. “The prescription is misplaced and routine,” he adds.

His disappointment arises from the fact that around 94 per cent of the existing farm credit corpus goes directly to agro-based industries and not to the farmers. “So when the finance minister said Rs 8.5 lakh crore will be given as farm credit, he actually meant that the farmers would get only Rs 50,000 crore or six per cent of the corpus,” says he.

Experts, as a result, say that instead of just mindlessly increasing the farm credit corpus, the Centre should spell out its definition to ensure that it benefits the farmers. “The problem is that the definition of farm credit has expanded over time and now includes retail chains and storage houses that eat into the subsidy. The interest charged on farm credit is just 4 per cent which every industry, including the ones that are not even associated with agriculture, wants to get benefit from,” says G V Ramanjaneyulu of Hyderabad-based non-profit, Center for Sustainable Agriculture.

Experts are also unsure of the Centre’s decision to restructure and de-link Centrally sponsored schemes. The 14th Finance Commission recommendation that have been accepted by the Centre, say states should be given autonomy over famer schemes because agriculture is a state subject.

“Now each state will have to decide how much budget it needs under the Rastriya Krishi Vikas Yojana (RKVY),” says Nilachala Acharya, senior research fellow at Delhi-based advocacy group, Centre for Budget and Governance Accountability. According to the 12th Plan, under RKVY, a Centrally-sponsored programme, the Centre will spend Rs 60,000 crore in the next five years.

“But it is too early to leave the responsibility on the states because they do not have the required infrastructure to be able to implement the scheme. This will finally impact farmers,” says Acharya.

Agriculture scientist M S Swaminathan, who is a former Member of Parliament, says, “Since state governments will now have additional resources, I hope many of the area-specific problems in agriculture and rural development will receive the needed attention.”