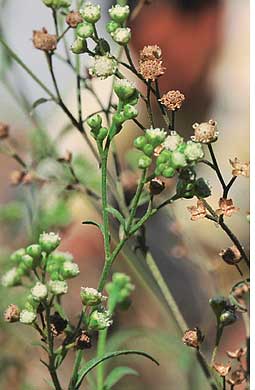 Agents to control this dreaded weed work well in labs, need to be taken to fields

congress grass or parthenium, a native of tropical America, came to India accidentally in 1955. A rapidly growing invasive species, this grass competes well for nutrients and space and reproduces fast. One of the world's seven most notorious weeds, parthenium has already taken over about five million hectares of this country's land. Many methods, ranging from manual uprooting, chemical herbicides to biological control agents, have been proposed to limit the spread of this uncontrollable variety of grass. Biocontrol agents are the most preferred as they are inexpensive and cause few side-effects.

In the recently held Indian Science Congress in Shillong, Rekha Shukla--a research student from R D University, Jabalpur--presented a paper on the southern blight fungus, Sclerotium rolfsii, which is a potential bioagent. The blight fungus grows on the stalk of the weed degrading its tissues and killing it eventually. She also presented statistics on the best medium to grow the fungus.

Shukla isolated a strain of Sclerotium rolfsii that is highly specific towards parthenium. She took spores of the fungus from infected plants and grew them in a sugar-based medium. She then transferred the fungus to 20 different agro-waste substrates such as tomato pulp and wheat bran and recorded the growth of the fungus.

The results showed a combination of readily available organic wastes like tea leaves, bagasse, wheat bran and straw, to be the best medium for the fungal spores to grow in large numbers. This increased its ability to spread without requiring periodical replenishment. It also increased its pathogenicity towards the weed.

When the southern blight fungus was tested on parthenium patches under lab conditions, Shukla found the strain to be very effective in controlling the weed. But in crop fields, it was found to infect brinjal plants as well. Shukla suggested the fungus be used to control the weed in residential areas until further studies are conducted to increase its host specificity.

Pankaj Oudhia, the convenor of the International parthenium Research News Group, said instead of concentrating on lab trials of various biocontrols, "we should proceed for research on potential agents capable of biocontrolling parthenium in field conditions."


Quite a few bioagents, including the the leaf beetle, Zygogramma sp, and the rust fungus, Puccinia abrupta, have been used in the management of parthenium in different parts of the world. These agents succeeded in lab trials but failed in field conditions.

The leaf beetle was introduced in Australia sometime ago. It was unsuccessful in the field because it is active only during the monsoons while the weed grows throughout the year. Ricardo Labrada, a scientist from the Plant Production and Protection Division of fao, cautions, "It is not a good idea to introduce a biocontrol agent to a new habitat...it might be harmful to beneficial plants and crops." Similarly, the rust fungus could not be used in Australia as it was found to affect sunflower plants.

Cassia sericea, a common leguminous plant, was introduced as a bioagent in parthenium-infested areas in India. Cassia sericea releases certain biochemicals by which it suppressed the germination and growth of parthenium, without affecting other plants and crops. The natural process of replacement of parthenium by Cassia sericea, however, is very slow, and could take years. Also, the plant is sensitive to very dry areas and high altitudes with low moisture levels.