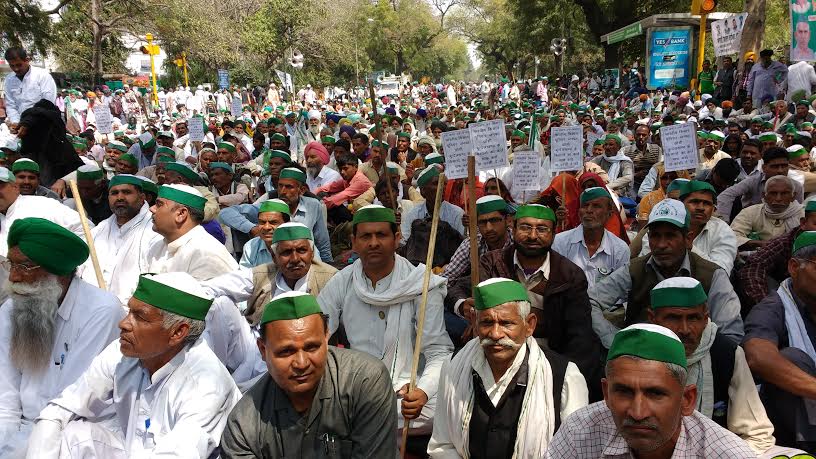 After last year’s protest over compensation for crop loss due to unseasonal rainfall, this year too, several farmers’ unions organised a kisan mahapanchayat on Thursday at Jantar Mantar where the agrarian community voiced their grievances against the Centre’s anti-farmer policies.

Farmers from across the country participated in the event organised by the Bhartiya Kisan Union (BKU). Farmers’ leaders from Shetkari Sangathana based in Maharashtra, Karnataka Rajya Rait Sangh, several associations from Tamil Nadu and the Bhartiya Kissan Union addressed farmers gathered at the venue.

Following are the main demands raised by the farmers:

Ramphal Kandela from Jind said that farmers were not getting any benefits from crop insurance schemes. Despite all the tall claims made by the government, the ground situation is such that bank officials deduct insurance premiums from farmers automatically but do not give details about insurance schemes or companies, he added.

Makhan Singh from Fajilka district of Punjab said that the relief amount provided was too low. Land rent and other factors are not taken into consideration appropriately before deciding the relief amount, Singh added.

A group of women farmers from Utter Pradesh complained that they had witnessed successive crop failures due to drought and unseasonal rainfall and hail.

National spokesperson of BKU Rakesh Tikait and general secretary Yudhveer Singh said that the main concerns of the farmers were to get fair and remunerative prices for their crops.