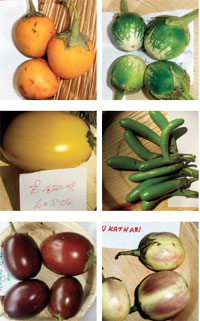 It comes with a green crest and many call it the king of vegetables. So how can the royal vegetable be genetically modified? That was the message of a Brinjal Festival in Hyderabad on March 8 . Did you know that the vegetable has 1,200 varietie— we aren’t talking of the genetically modified imposters here. More than 150 of these varieties were on display. Visitors, lined up at the food stalls where various lip-smacking dishes made from brinjals were on offer. “I don’t think the government should promote sales of genetically modified brinjals,” M Rekha, a homemaker told the daily The Hindu. The event was organized by the non-profits Centre for Sustainable Agriculture, AID India, Deccan Development Society and Chetana Organic. “Invitations were send to agriculture universities and horticulture and agriculture departments, but none of them sent representatives,” said G V Ramanjaneyulu, director, Centre for Sustainable Agriculture. Ôûá