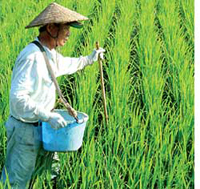 China's Communist Party on October 19 approved a key rural reform policy that would allow farmers to "lease their contracted farmland or transfer their land-use rights". The party hoped the shift in policy would double rural incomes by 2020. Although China's 800 million farmers owned their produce, farmland in China was owned collectively; 30-year leasing contracts were awarded to the farmer while the government controlled the land. This meant the local administration could always take away land from farmers without giving compensation. The new policy would stop this. It mandated that "all transfers of land-use rights must be voluntary, with adequate payment". This would also help farmers to swap their rights or even subcontract their plots. But there were other fears large landholders might take advantage of the changed policy.

Pakistan witnessed unruly demonstrations on October 22 as a nation angered by over-billing and unscheduled power outages took to the streets. Protesters attacked the Water and Power Development Authority offices in several cities and burnt electricity bills. The situation worsened as power supply to many parts of Karachi was cut off due to overload in major power plants like the Bin Quasim Power Plant and Karachi Nuclear Power Plant. On October 26, Prime Minister Syed Yousuf Raza Gilani said the government planned to bring in power plants on ships in the sea to reduce power outages. Blaming the lack of infrastructure, Gilani promised to set up new power stations by early 2009.

More people in Seoul would now be seen cycling to work as the city government planned to construct 207 km of cycle pathways in the next four years. The us $88 million project was based on a "road diet" programme under which the number of lanes for passenger vehicles in major roads would be reduced to create new cycle paths. Only 1.6 per cent of all commuters used bicycles in Seoul, partly due to a lack of dedicated paths. The city government wanted to increase this to 10 per cent by 2020. The city would also construct bicycle parks at 16 subway stations, complete with shower rooms and lockers for cyclists before they transited to the subway. According to the city mayor, Oh Se-Hoon, this was a good way to combat global warming and traffic congestion.

The Java mud volcano, dubbed Lusi, was triggered by drilling in a nearby gas exploration well and not by an earthquake that occurred 150 m away, concluded geologists from across the world at an international conference in Cape Town, South Africa. Most of the scientists approved the results of a month-long study that blamed the mud eruption from the gas exploration well, Banjar-Panji-1, on drilling by oil and gas company Lapindo Brantas (see 'Lusi down and under', Down To Earth, July 1-15, 2008). The key reasons cited were the earthquake was too small and too far away to have had a role. Lusi, which erupted in May 2006, has since inundated 12 villages and displaced over 40,000 people.

The Biseni community in Bayelsa, Nigeria, is threatened by a possible outbreak of epidemic following an oil spill that occurred at a delivery line between Biseni and Joinkrama. The crude oil spill in early October from a Shell Petroleum Development Company (spdc) pipeline damaged crops, aquatic lives and the river, the only source of drinking water for the community. Though spdc rectified the leaking point, it refused to move to the site to mop up the spillage. If the spillage was not cleaned soon, people would be forced to drinking contaminated water which could cause an epidemic. Bayelsa is located in the Nigeria Delta and has one of the largest crude oil deposits in the country.

Satellite images of Paraguay taken in mid-October revealed hundreds of hectares of forestland destroyed within 30 days by two Brazilian companies. The patch of forest belonged to Ayoreo-Totobiegosode Indians. Called Chaco, their territory is a vast expanse of dense, scrubby forest, stretching from Paraguay to Bolivia and Argentina. The images showed the forestlands wiped out to be double the amount of land that was cleared in May this year. It was being destroyed by Yaguarete Pora SA and another Brazilian company, River Plate SA, mainly to graze cattle for beef, leaving the Indians vulnerable to outside contact. The images caused an outrage among the community. Paraguay's new president, Fernando Lugo, denounced the act as a "violation of (the Indians') cultural, environmental and territorial rights."

Canada became the first country to ban baby bottles containing bisphenol A (bpa), an organic compound suspected of being hazardous to humans. bpa, a chemical found in some polycarbonate plastic bottles and the lining of canned goods, grabbed headlines in 2008 when several governments issued reports questioning its safety. Some retailers pulled out products made from bpa off their shelves (see 'Packaging poisons baby food', Down To Earth, January 31, 2008). The evaluation of bpa by Health Canada, the government health department, was launched last year as part of a study of about 200 chemicals the us government had designated for more careful research.Once the department, along with Environment Canada, the environment ministry, released its draft assessment of bpa, a 60-day public comment period would follow. Ottawa then had a year in which to issue a report outlining how it would control exposure, assuming that no new information came out of the public comment period.

The European Medicines Agency (emea) ordered the anti-obesity drug Rimonabant to be withdrawn across the eu as the risk of serious psychiatric problems were too high. The European drug watchdog asked doctors not to prescribe the drug, also known as Acomplia, as data from recent studies showed that obese or overweight patients were twice as vulnerable to psychiatric disorders. Rimonabant, manufactured by Sanofi-Aventis, a French pharma group, failed to win the approval from us Food and Drug Administration in the past amid mounting scientific evidence of suicide dangers. The pill awaited approval in Australia, even as 2,500 adverse reactions were reported by British patients since it became available to private buyers two years ago. 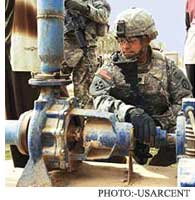 With more than 500 confirmed cases of cholera in Iraq, the health ministry and who blamed the country's drinking water and sanitation. Since its outbreak in August 20, eight deaths have been confirmed in southern Baghdad. According to a survey by the Iraqi health ministry, 17 per cent of the pipe water nationwide and one-third of the water in Baghdad was not potable. Most of the pipes leaked, because they were more than 30 years old. This led water to mix with sewage rendering the added chlorine ineffective, the ministry said. The government recently said it would build a water treatment plant in eastern Baghdad, with an eventual capacity of 2.275 million cu m of water. The daily requirement for drinking water in Baghdad was at least 3.25 million cu m; people received 2 million cu m, according to Hazim Ibrahim, the deputy head of Baghdad's water directorate.

Water supplies for 26,000 people were cut off in southwest China after a lake was found contaminated with arsenic and other pollutants. Operations were suspended at the water plant that drew its supply from Yunnan province's Yangzonghai lake in July after contamination came to light. Three executives of Jinye Industry and Trade Co, a chemical firm suspected to be the major polluter, were arrested and faced criminal charges. The local vice mayor and 12 local government officials were also sacked for contamination of the lake. The local government has been blamed of blindly pursuing economic growth leading to lax pollution control around the lake despite orders from Beijing to prioritize the environment. The officials had ignored regular complaints from local people against the factory.

A Korean ethanol factory in Kandal, Cambodia, came under fire when over 1,000 villagers alleged that it discharged toxic effluents into the lake--their only source of livelihood. Fishermen of Kandal's Prek Pnov commune complained to the local authorities that the effluents of M H Bio-Energy Group were killing up to 80 kg of fish everyday. They further said that their livestock died on drinking water from that lake and threatened stronger protests. Even though the villagers did not haveevidence to back their allegations, the complaint stated that the company acted irresponsibly by not responding. M H Bio-Energy denied the allegations and said its drainage system was four metres under the ground. They, however, acknowledged that the stench in the village came from the lake.