Vertical farms, the successful marriage of agriculture with industry, are the farms of the future 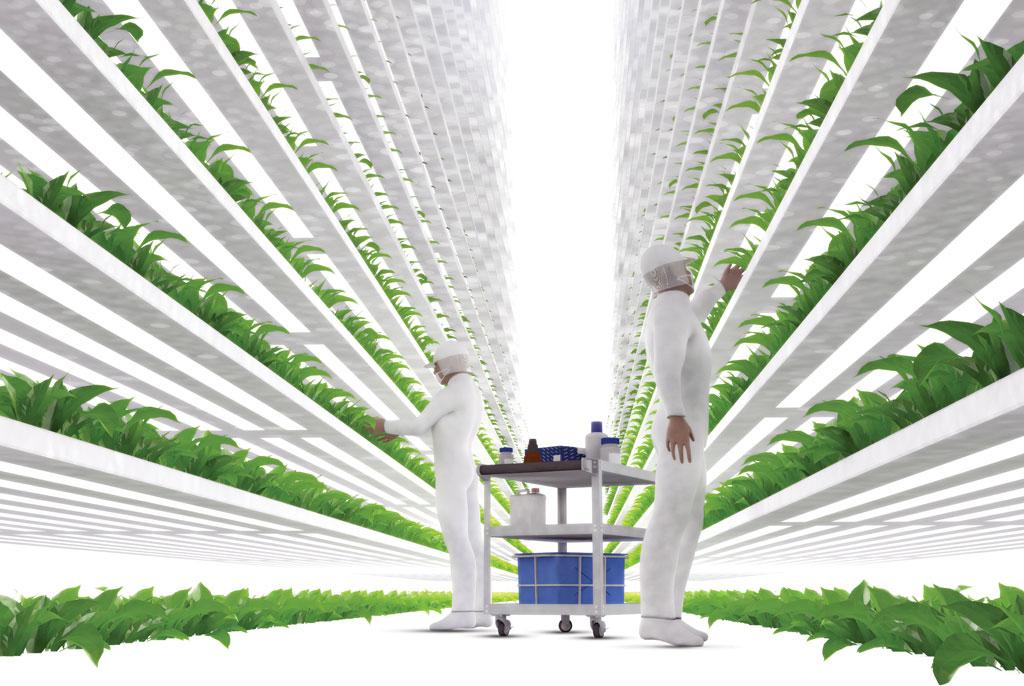 There is something about a field, green/golden and rich with produce, which epitomises the romance of farming. With a farmer in the frame, it showcases the fundamentals of agriculture as we have known it for millennia—the interconnectedness of the earth with water, sunlight, nitrogen, carbon and energy.

Many of the fields —and the farmer—are now disappearing. The shrinking space for cultivation, the loss of arable land to salinity and other ravages of nature, have forced cultivators to look at alternatives that have turned conventional farming on its head. Instead of the outdoors, it is all indoors. Growing in futuristic multi-storey greenhouses that jab the sky with their arresting architecture are some fruits and a range of vegetables. These vertical farms thrive without soil, without agrichemicals (no fertilisers or pesticides) and many without sunshine at all. It is as far removed from traditional farming as imagination or current practice allows.

You could call this the rising future of agriculture although that would exclude a few experiments that go in the reverse direction: underground. Vertical farms, the successful marriage of agriculture with industry (lighting firms, Silicon Valley), are the farms of the future. Their USP is that farming can be insulated from the capriciousness of nature when a sudden downpour or hailstorm can destroy a crop or a farmer forever. Total control of the environment and the growing process is clearly a trend of the future. Sensors monitor everything—temperature, humidity, illumination—and send to cloud computing where the data is crunched to work out the best regimes for future crops.

And there are tremendous benefits. Drastic reduction in water usage (up to 70 per cent less than traditional cultivation), shorter duration crops, the year round, immune to weather events; no use of agro-chemicals (no pesticides, herbicides or fertiliser); no need of fossil fuels. Best of all, there is no agricultural run-off. For city dwellers, this is the agricultural innovation that will have a direct impact on their lives. Healthy greens will be delivered fresh to city markets without leaving a large carbon footprint and these greenhouses can be set up just about anywhere. In London, subterranean space that was once a World War II bomb shelter is now growing 20 types of salad plants that are being sold to city eateries.

In Japan, it was the Fukushima disaster that set the country on the vertical greenhouse trajectory. The 2011 tsunami not only destroyed large tract of its farmland but its impact on the nuclear power plants released high level of radioactivity in the region that rules out cultivation in the vicinity. The direct fallout of Fukushima is a monstrously large greenhouse near Kyoto, reputedly the largest vertical farm in the world turning out 20,000 head of lettuce, day in, day out.

Dickson Despommier, professor emeritus of public health at Columbia University, who is the innovator of the “vertical farm”, recounts the experience of a Florida farmer whose over 30 acres (1 acre equals 0.4 hectare) of strawberry fields were destroyed in 1992 by Hurricane Andrew. With the compensation he got, the farmer decided to build a greenhouse because he thought a sturdy one would withstand the next storm. That turned out to be the right calculation. Besides, the hydroponics he deployed to grow strawberries in one acre of indoor space was equivalent to that he produced on his traditional farm. He has allowed nature to reclaim the unused 29 acres and turn into wetland which, of course, is great news for the environment.

This radical new form of farming will spread widely in the decades ahead and could be a godsend to Indian farmers. At the moment what we have are the low-end greenhouses, of the kind that were first used a century ago.

Just as the Green Revolution of the 1960s changed the contours of agriculture with use of more seed varieties, large (wasteful) amounts of irrigation and unwise applications of fertiliser and pesticide, the next revolution will focus on the journey back to a more sustainable future: farming—doing more with less but on a bigger scale and with greater efficiency. As agriculture struggles with apocalyptic changes in weather, the lethal legacies of the industrial model of farming, of devastated soils and depleting natural resources, it will be looking back at an era when farming was not so messed up to find solutions to a future riddled with grave anxieties.

Take a current example. Right now, drought is making news across continents. California has just emerged from an epic five-year drought, the driest season in 1,200 years according to scientists who used paleoclimatic reconstructions to arrive at this figure. According to the US Drought Monitor, over 95 per cent of California’s $43-billion agricultural sector had experienced severe, extreme, or exceptional drought. The water emergency has just been lifted and lessons have been learned.

If one were looking for something entirely futuristic in the sci-fi mould, then the state’s Central Valley is the place. Here farms are almost entirely wired up. Moisture sensors planted across the almond groves keep tabs on the soil and send data to a cloud computing centre which analyses it and sends it back to the farm’s drip irrigation system. Based on the cloud computing analysis, a measured dose of water mixed with fertiliser is pumped through the system to each tree, alternating between one side of the trunk and the other for better results. The trees are watered more often but the water used is less than when the trees were watered weekly under the earlier method.

Some of the sophisticated future is already here, with the deployment of aerial robotics or drones specially developed for agriculture, in combination with satellite imaging to zap weeds, harvest fruits at the right time or to deliver fertiliser and pesticide at prescribed intervals, not just to an entire farm running into thousands of hectares but even to individual plants that need extra loving care.

In India, agriculture is a long way off from such a future, although the well-to-do farmer in Punjab may be adopting a system of new tools combined with sustainable practices. These include laser-guided tractors that plough his fields with precision and digital apps for applying inputs and water to improve efficiency. The most widespread innovation, if it can be called that, in 2017 is the detailed weather forecast delivered on mobile phones.

Battered, yet ever resourceful, will farmers be able to cope with the challenges of the next quarter century or will they be overwhelmed by the numbers that we face? By 2042, the world will have nine billion mouths to feed, India alone accounting for 1.65 billion of those. If we want to avoid mass deprivation, that is, malnutrition at one end of the scale or outright starvation at the other, we need to increase food production by 70 per cent. That’s what the UN’s Food and Agriculture Organisation (FAO) estimates. Are genetically modified (GM) food crops, whose proponents claim will provide higher yields and be able to withstand the furies of climate change, the solution?

Far from it. The next 25 years will mark the decline and gradual easing out of GM technology since public opinion against this technology has sharpened despite every attempt by the industry to portray itself as the saviour of farmers in a climate stressed world. Marking the 20th anniversary of the global commercialisation of biotech crops (1996-2015), the lobbying agency International Service for the Acquisition of Agri-Biotech Applications (ISAAA) crowed that GM had widened its spread from 1.7 million hectares to 179.7 million hectares in 2015 as “the fastest adopted crop technology in recent times”.

But this claim papers over an uncomfortable reality. Those 179 million hectares account for just 3.7 per cent of the world’s total agricultural land. India, the largest user of GM cotton worldwide, shed 1.4 million hectares last year, a drop that will pull down the total further.

For more than three decades the GM industry has been promising to produce plants that would be resistant to the stress of drought, heavy metals and salinity, and reduce the use of toxic pesticides and even fix their own nitrogen. And, of course, increase yield. It has not delivered on any of these promises. Only two kinds have been developed so far: one for herbicide tolerance (85 per cent) so the whole crop can be sprayed with glyphosate to kill the weeds, and the other for insecticide production to contain the toxin of the bacteria Bacillus thuringiensis (Bt). Golden Rice, which supposedly raises vitamin A levels, has been shelved because it was never proved to do so. All the while resistance to GM has intensified. After cultivating GM plants for almost two decades, four California counties have banned them entirely. So have 38 countries.

It’s unlikely that stress-tolerant GM plants will come to the rescue in the next 25 years. Since 2005, over 1,000 applications were approved for field testing such crops. Not one is in the market. Scientists believe stress tolerance is not a solution to the causes of stress. Even the sturdiest plant engineered for drought tolerance will not survive in soil that’s low in organic matter and not able to hold water. It would eventually die because using GM to overcome the environment will never work for long. That’s why noted biotechnologist Jack A Heinemann of the University of Canterbury calls GM a “distraction from investing in real solutions to the problems faced by real farmers”.

In the pipeline is something different: RNA interference (RNAi) or gene silencing, which is an old technique now being applied to agriculture, and a new gene editing tool called CRISPR/Cas9 which is basically a programmed set of molecular gene scissors. But these technologies could already be dead in water since the EU has said that they need to go through the same regulatory process as GM.

In 1967 the Beatles sang Strawberry Fields Forever. Half a century later, the fields are vanishing. A quarter century down the line GM crops may also have receded into the recesses.

Latha Jishnu is a freelance journalist