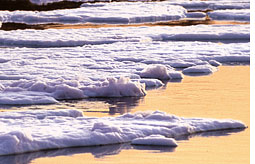 on january 11, the Ahmedabad Municipal Corporation approved a mega pipeline project to dump the city's industrial effluents in the Arabian Sea. Corporation authorities claim the multi-crore project will protect the Sabarmati river from further pollution.

Several industrial units have been releasing waste directly into the river that is a major source of drinking water. "The norms of the state and central pollution control agencies prohibit industries from dumping such waste withot proper treatment. However, at present, the textiles units in Narol alone generate about 70 million gallons per day of waste; violating the norms by a lot. A major part of this goes untreated and reaches the river," said a senior officer at the corporation. There are about 4,000 textiles units near the river.

The 95-km pipeline will carry waste from the Narol industrial area in the outskirts of the city to the Gulf of Cambay in the Arabian Sea. The authorities say that the project will follow all the rules of the National Pollution Monitoring Agency.

An effluent treatment plant will treat the waste before releasing it into the sea. The Gujarat Industrial Development Corporation and Gujarat Pollution Control Board are also part of the project which the state government will finance. The authorities have not set any deadline for the project's completion.

A French agency, stup, is currently conducting a feasibility study of the project. It will look into all the technical and financial aspects of this project. The National Institute of Oceanography in Goa will fix the discharge point in the Gulf of Khambhat.

However, several environmental organizations have come up against the move saying that dumping industrial effluents will cause serious damage to marine life.