Why the disease progresses quickly in Indians 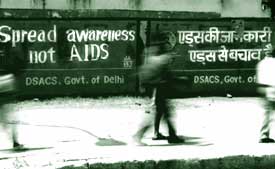 research has shown that if an Indian gets infected with the human immuno virus (hiv), the chances are that it will quickly develop into a case of full-blown aids ( acquired immunodeficiency syndrome). The problem seems to be that Indians have a preponderance of susceptible genes, which increases the rate of progression of the disease.

The study was conducted at the department of transplant immunology and immunogenetics of the All India Institute of Medical Sciences in Delhi. The yet-to-be-published results were compared with the figures available for Caucasians and presented at the First National Conference of aids Society of India held in Delhi from April 2-4. Led by N K Mehra, the group studied the role of cellular proteins such as the Human Leukocyte Antigen (hla) and chemokines that are involved in aids progression.

The gene coding for hla occurs either as hla-b *35 py or as hla-b*35 px. The py variant is linked to slow progression while the latter is associated with quick progression of aids. The researchers found the px group is 2.5 times more common among Indians as compared to Caucasians. Further, a gene -- hla-b27 -- associated with joint pains but offering protection against aids, was found in just 4-6 per cent of healthy Indians.

Similarly, the gene coding for chemokines occurs either as ccr 50201 or ccr 50202. The former, linked to faster progression of aids, was found to have a very high prevalence among Indians. If a part of this gene is missing, the viral entry is stopped. This deletion has a frequency of 10 per cent in Caucasians but is absent in Indians. Another study carried out by researchers at the National Institute of Immunology, Delhi found just one person with the protective ccr5 variant in a group of 145. It is suggested that genetic make-up of Caucasians is responsible for hiv infection taking as long as 20 years to progress to aids, while in Indians, the infection could lead to the disease in just four years, says Mehra.

While these results are based on studies carried out mainly on healthy people, the group is also studying 200 people infected with hiv "to see how exactly the genes affect progression," says Mehra.

The finding indicates that preventive vaccines made in other countries might not be very effective in preventing the disease among Indians. But according to Bruce Walker, professor of medicine at the Harvard Medical School in the us , that may happen only for a vaccine based on small proteins, and if one is making a vector that expresses a larger protein, "This is much less an issue." Information on progression rates is not available in India though it is faster in the developing countries because of multiple infections and lack of antiretrovirals, reveals Anandi Yuvraj, programme officer, India hiv/aids Alliance, Delhi.

It is not the first time that such an assessment has been done. A study published in the May 2004 issue of the Journal of Acquired Immune Deficiency Syndrome (Vol 36, No 1) showed the mortality rate of Thai men was 56.3 deaths per 1,000 person-years, or 18 per cent five years after hiv infection, as compared to a 9 per cent mortality rate among individuals living in Western developed countries.