AIDS messages: tell-all, or nothing?

What do Sushma Swaraj and George W Bush have in common? A mutual contempt of condoms, for one. The us president is known to prefer spreading the word about abstinence over safe sex. Sushma Swaraj too favours this mode 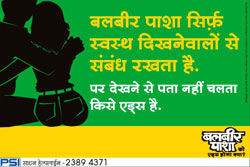 What do Sushma Swaraj and George W Bush have in common? A mutual contempt of condoms, for one. The us president is known to prefer spreading the word about abstinence over safe sex. Sushma Swaraj too favours this mode.

The bbc World Service Trust, in partnership with Doordarshan and the National aids Control Organisation (bbc-dd-naco), had developed a series of television advertisements focusing on aids prevention in India. These ads had an eventless run for more than seven months, till they came under the scrutiny of the then Information and Broadcasting minister, Sushma Swaraj, in December. The minister, urged by the Joint Action Women's Front, pointed out that the spots concentrated on promoting condoms, without addressing other forms of transmission. She argued that such 'condom-centrism' promoted promiscuity among the young, and did not address the issue of women being able to negotiate for safe sex.

In a second incident, the Population Services International (psi), a non-profit social marketing organisation, mounted a campaign to promote condoms among lower income group men in Mumbai and elsewhere. This campaign is under attack for portraying female sex-workers as vectors of the disease and also suggesting that aids is prevalent only among the lower income groups, when there is enough evidence to suggest otherwise.

The issues raised in both campaigns highlight a major dilemma in designing aids awareness efforts. Is it better to focus on the behaviour of a target group at the expense of the complex nature of the issue, as in the case of psi? Or is the campaign better off focusing on sexual transmission of aids alone, leaving out other forms of transmission to later efforts as is the case with the bbc-dd-naco campaign?

aids awareness programmes ideally need to have both immediate as well as long-term goals. But if an aids campaign addresses the issue in great detail, taking care that all forms of transmission and the need for equitable gender relations are highlighted, would the message then become diluted? In other words what comes first, behaviour change or social change? And how can one-minute advertisements, likely sometimes to be seen just once, be used to address all the complexities involved in the issue?

Bush would gladly think that he has found an Indian ally for his cause against reproductive rights. Sushma Swaraj for her part used the opportunity to push for 'abstinence', and pulled some 'condom-centric' spots off the air. And now that she has the health portfolio, the signs are ominous.